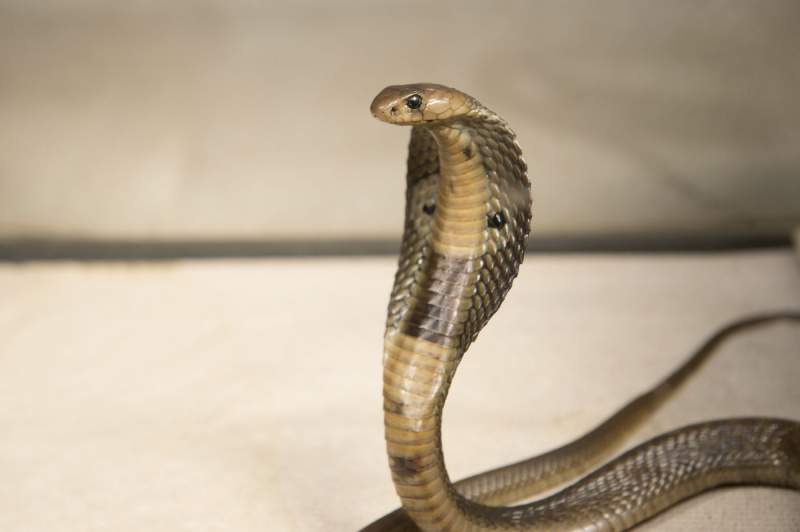 THREE illegal cobras seized by officials rehomed in Spain’s Benidorm.
Three venomous and highly dangerous snakes were seized from a private home in Toledo after officers from the SEPRONA section of the Guardia Civil discovered that the owner was not in possession of the correct licensing or safety equipment to own the reptiles. One king cobra – the largest poisonous snake in the world – and two forest cobras have been rehomed in the Terra Natura Park in Benidorm on Spain’s northern Costa Blanca.
A herpetologist (someone who specialises in the study and care of reptiles and amphibians) travelled from Benidorm to the capital of La Mancha to supervise the transfer of the snakes, the handling of which is extremely dangerous owing to the high level of venom their bite can deliver.
Enrique Sánchez, head of animals at Terra Natura, confirmed to Radio Alicante that the rescued king cobra is approximately three years old and measures about 2.20 metres long. The pair of forest cobras appear to be much older, at around 20 years old and measure two metres and 2.10 metres.
While two of the reptiles were in good physical condition, Mr Sánchez said that the third had an abscess on her body while required surgical drainage by a vet.
According to the snake expert, while it is not against the law in Spain to keep these reptiles as pets, strict safety measure have to be followed, including having the correct anti-venom on the property, which the former owner did not.
The keeping of exotic reptiles in unsafe conditions, unfortunately, seems to be on the rise in Spain. Last month, a 31-year-old man living in Central Spain was charged with crimes against animals when he was found in possession of no less than 45 venomous snakes, including cobras and green mambas. His case was originally brought to the attention of the authorities when he claimed to have been bitten by a rattle snake while out walking in a field.