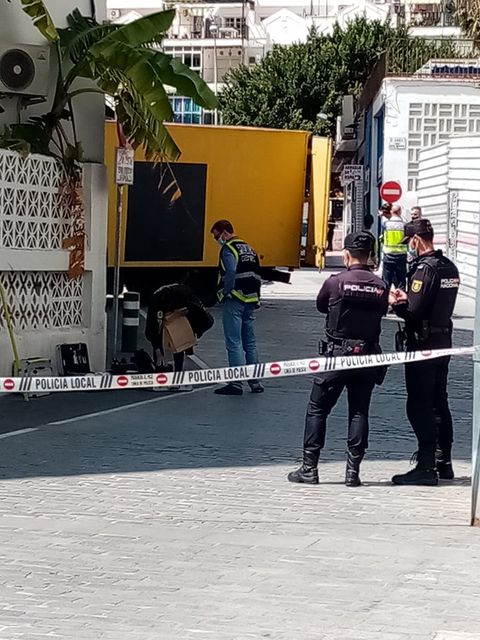 MAN shot dead in a van on Spain’s Costa del Sol.
The National Police on Spain’s Costa del Sol have launched an investigation after a man was found shot dead inside a van in the centre of Torremolinos shortly before 9am on Monday morning, April 19.
According to Spanish news outlet La Vanguardia, emergency services and patrols from both the National and Local Police rushed to the scene on Calle Madre del Buen Consejo after several concerned members of the public phoned to say that there was a dead man in a distinctive yellow van. Officers from specialists units of the Scientific Police and the Judicial police cordoned off the area in the Plaza del Buen Consejo, in front of the Casa de la Juventud and the Maruja Limón restaurant, where they are currently investigating the shooting.
A local resident told Sur that the yellow van had been parked in the same location for several days, and that he heard several loud bangs earlier that morning, but did not know if they were gunshots.
Police sources have not yet confirmed whether a murder investigation is underway but the deceased is believed to have suffered from a least one gun shot.

This is a breaking news story; please check back for further updates.
Related News:
Dozens of arrests have been made across the Costa del Sol and Costa Blanca as police shut down ‘an important’ drug network that ‘supplied hashish to other criminal groups.’ The arrests were made in Malaga, Alicante and Murcia and police seized more than 2.3 tonnes of hashish, 22 high-speed boats, 19 lorries, weapons and €118,000 in cash.
“The Guardia Civil, within the framework of the operation ‘Desvanes-Dunas 20’, has dismantled an important criminal organisation dedicated to introducing hashish into Spain from Morocco. In the same way, it offered its services to other gangs to introduce drugs through boats,” said the police in a statement.