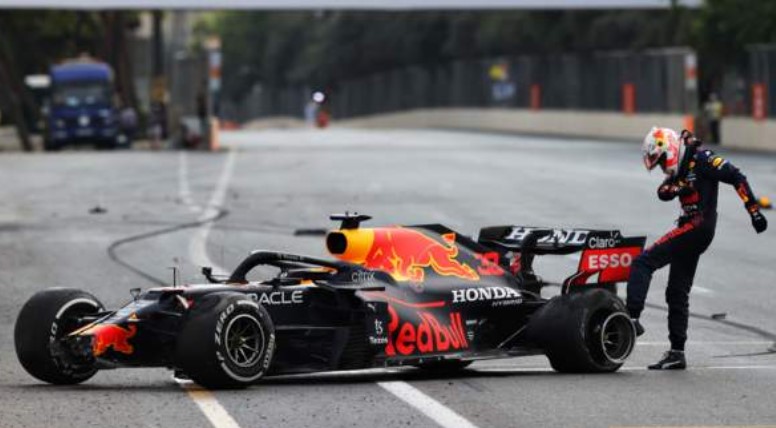 One of the most extraordinary Formula One races of all time took place this afternoon in Baku, the capital city of Azerbaijan, where after a series of dramatic events the race was eventually red-flagged, leaving Mexico’s Sergio Perez in the Red Bull, as the winner, Aston Martin gaining their first podium points as Sebastian Vettel took second, and Pierre Gasly in third.

Lance Stroll in the Aston Martin had a dramatic spin at around 200mph on the main straight when his left-rear tyre suddenly gave up.

Max Verstappen had been out in front for most of the race, and looked to be heading for another victory, to extend his lead in the driver’s championship, but, on lap 46, with only five laps remaining, he had a high-speed spin similar to that of Stroll, crashing into the circuit’s wall on the pit strait, and out of the race, with the Dutchman seen kicking the offending tyre as walked from left the track.

The race was halted while the track was cleared, with the cars returned to the pit lane, leaving Lewis Hamilton in second place, just behind Perez, and if he could make a good start from the subsequent standing-start, then he would have an apparent clear run at the chequered flag for the final two laps, but, fate had a different ending in mind.

As the cars sped away, Hamilton looked to have got the jump on Perez and the result of the Azerbaijan Grand Prix now seemed a foregone conclusion, but all of a sudden, as they roared into Turn One, Hamilton’s car ran straight on, dropping him down to 16th place by the time he rejoined, eventually finishing the race in 15th, which leaves Verstappen still four points in front in the championship.

Speaking to Sky F1 after the race, the seven-time world champion explained, “Just on the restart, I think when Checo moved over towards me I clipped a switch and it basically switches the brakes off, and I went straight. Very hard to take but I’m mostly just really sorry to the men and women in the team who have worked so hard for these points”.