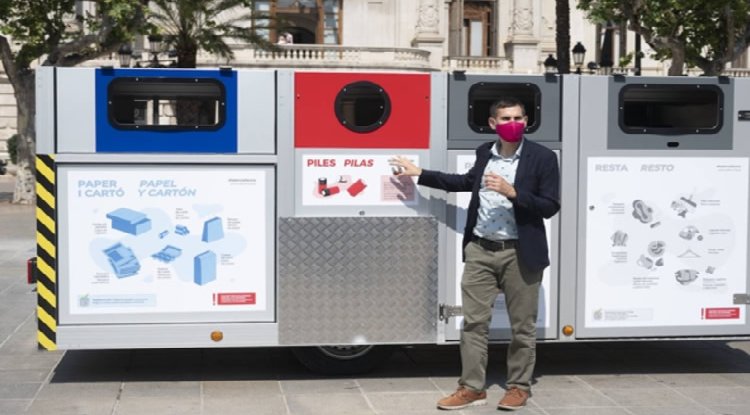 Four thousand residents who live in the northern part of Ciutat Vella will be the first in the province of Valencia to try a new garbage collection system, both for the gray container and for recycling, involving portable platforms that will be placed in position each day from 7pm to 11pm, in 15 different areas.

This new initiative is complemented by a door-to-door collection system in the shops and catering establishments of the area, in order to allow the removal of 80 containers, a project that seeks to clear the surroundings of monuments and the narrowest streets and will be exported to other places in Ciutat Vella and neighborhoods of Valencia, said Sergi Campillo, the councillor for Urban Ecology.

Other cities such as Palma in Mallorca already use this system, and it has been found to increase selective collection by up to 70 per cent, while reducing noise, and also facilitates the manoeuvreability of transport vehicles, in addition to improving the landscape of this part of the historic centre of the city.

The cost, at €950,000 euros per year is high, and covering the platforms and door-to-door collection, but the most important part is the informative one, that is, the neighbors know exactly the areas where the portable deposits will be located, as well as the collection times.

For this reason, a door-to-door campaign will be launched literally for all the affected homes, located on both sides of the Serranos towers, with the councillor saying, “all are advantages, so we have started in the north of Ciutat Vella, and our idea is to expand the system to other areas of the district, such as the rest of Carmen or Velluters, which have a similar urban typology”, according to lasprovincias.es.

In each place where the platforms are located, there will be a sign, with the schedules and the rest of the information, and in total, there will be five electric vehicles that will carry the containers.

Mr Campillo finally stressed that there will be a “process of information to neighbourhood, business and social associations, Fallas commissions and sellers and customers of the Mossén Sorell market”.