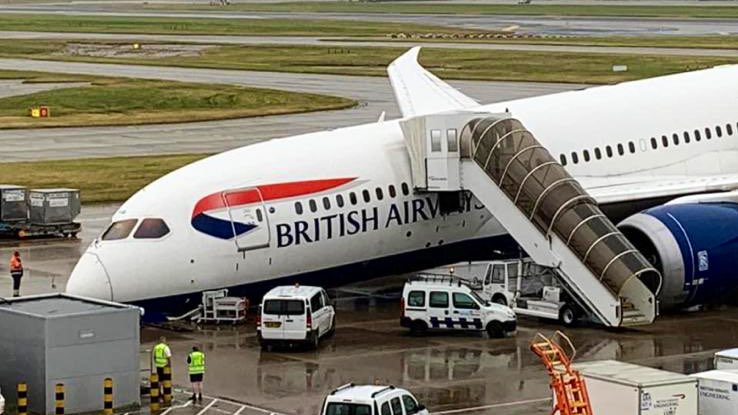 A British Airways plane has suffered a ‘nose collapse’ at Heathrow – ‘the jet just crumpled into the tarmac’ said one witness in the airport lounge. The Boeing 787-8 Dreamliner (reg. G-ZBJB) was carrying out flight #BA881 from Moscow when the incident took place.

Fire engines, ambulances and police rushed to the airport with the extent of the damage to the plane not yet known.

The Boeing 787’s nose gear appeared to have collapsed, with pictures showing the airstairs attached to the BA jet.

A British Airways spokesman said: ‘A freighter aircraft has been damaged while stationary on the stand. As a freighter the only aircraft there were no passengers on board. Safety is always our highest priority and we are investigating the matter.’

Aerohub News Tweeted: “An unidentified (at present) British Airways Boeing 787 has suffered a nose gear collapse at London Heathrow Airport this morning. The extent of the damage is currently unknown. Further details will be reported once available.”

It comes after the airline company faced a very turbulent year due to the Covid pandemic. The UK flag carrier started to bring people back ahead of the easing of lockdown restrictions on foreign holidays on May 17.