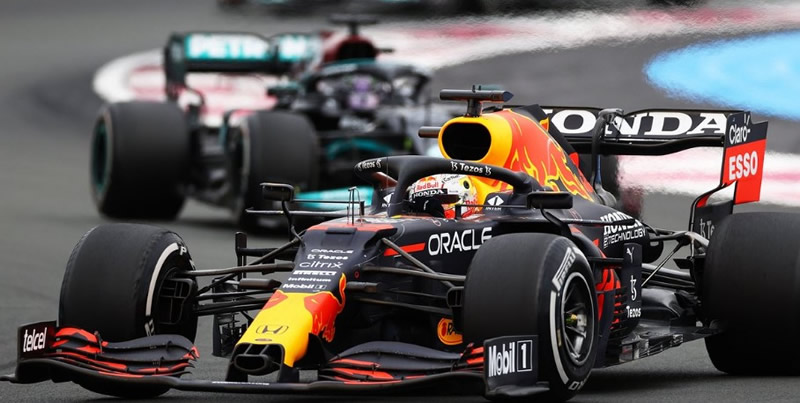 A thrilling finale to the French Grand Prix at the Paul Ricard circuit this afternoon (Sunday 20) saw Red Bull’s Max Verstappen overtake Lewis Hamilton’s Mercedes on the penultimate lap to take the chequered flag and increase his championship lead to 12 points over the seven-times world champion.

With the two cars evenly matched, the result was purely down to team strategy, as opposed to driver error, with the Dutchman’s second pitstop for fresh tyres clearly a risk, as it meant giving up the lead, but the fresh traction gave him the edge, and Verstappen swept past a struggling Hamilton on the main DRS straight on Lap 52.

Both drivers had started on the front row of the grid, and it was Hamilton who got the jump on his rival as they headed into Turn 1, and Hamilton was leading the race with Verstappen second and Bottas third as they entered the pit-stop period, with Mercedes calling Bottas in first.

Red Bull brought Verstappen in but Hamilton was left another lap, which proved calamitous, as the Dutchman used his new tyres to produce a brilliant out lap, and by the time the British driver exited the pits, Verstappen swept past him into the lead.

Red Bull jumped Mercedes again with the second pit stop on Lap 32, even after Hamilton had asked his team to make sure they brought him in first, and Verstappen rejoined almost 20 seconds behind Hamilton, but closed the gap quickly, passing Bottas on Lap 44, before taking Hamilton as they entered the chicane on lap 52.

This is the first time since 2013 that Red Bull has won three races in a row, with the winner saying after the race, “We had to work hard for it, but very rewarding”, with his teammate Sergio Perez taking third as well.