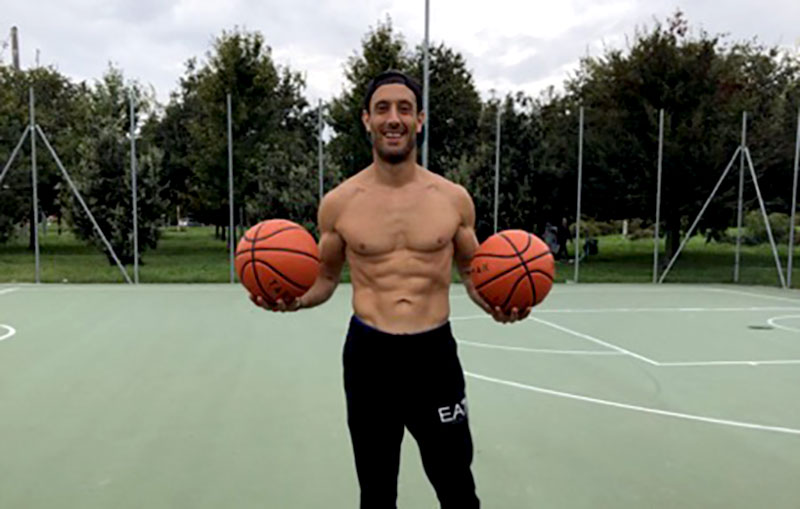 Born in Milan, Davide Panzeri, known to his fan base as Trickshotdav, stun, amaze and thrill his audience with mind-bending tricks. A magician with a ball, Panzeri grabbed the attention of Red Bull, who invited the entertainer for a day filled with trickshots, drone shots and records.  Collaborations with Fortnite and Big Brother Canada soon followed and required Panzeri to use all his trickshot magikery. It was not long before SportCenter pricked their ears in the entertainer’s direction, broadcasting Trickshotdav across the globe alongside humorous commentary.

Living in Italy until the age of 15, Panzeri continued his education in Canada. Facing bullying and a difficult home situation, the move was necessary. He eventually became a tech founder and executive, but Panzeri felt that his chosen path was not quite right for him and explains in his own words:

“I was working at the United Nations for a while, but I realized that my work wasn’t having a real life impact. I invested and became co-founder in Acadium, which provides free hands-on education to students worldwide. I scaled the company and we raised funds from SF as well as got accepted in one of the best accelerator programs. However during this stressful period, I was overprescribed medications for an anxiety condition.

Doctor after doctor didn’t believe me when I said that the medications were making me sick and they kept changing them. They caused massive chaos and messed up my nervous system. I developed a condition called akathisia, many people that develop this kill themselves, as you can’t stay still and have anxiety 24/7. I managed to survive. I slowly got off antidepressants and I am still recovering and I now do trick shots to distract myself and to inspire others that anything is possible as long as we don’t give up. What began as therapy is now my new career.”

In early 2020 Davide had to leave behind the company he had built. During his recovery he started going to the basketball court and challenged himself to do trickshots of increasing difficulty. Documenting his progress on social media, viewers could see Trickshotdav completing halfway shots, blindfolded shots and even bicycle shots. What had begun as a form of escapism soon turned into a successful career, complete with the entertainer’s own merch.

A fair amount of hand-eye coordination and copious amounts of determination is needed for each of the trick shots Davide Panzeri attempts. From double ball tricks to bagging the basketball while blindfolded, Panzeri spends hours perfecting each shot. In the early days trick shots could have taken up to 200 attempts before a successful attempt shines through. As his skill improved Davide noted that he can complete his earlier trickshots with much greater ease.

He states: “I can now complete those early shots that took me 200 tries before in 80% less time now. People think it’s only luck, but really I am doing things now that were impossible before and this is because through practice I improved my accuracy, skill-set and mindset. You need luck for the ball to go in, but you need to have those things to get close.”

Always striving to improve his skills, the entertainer carefully documents and shares his experiences with his followers on social media. In the videos one can see Trickshotdav openly share his excitement and emotions making the content even more entertaining for his followers. In videos documenting trickshots involving ping pong balls it is not uncommon to see the floor littered in discarded balls, serving as a visual reminder of how many times Panzeri attempted the trick before being rewarded with success.

Performing trickshots was good for Panzeri’s mind and body. He said: “My coordination improved, my athleticism, my mindset. Proof of this is that I can now do much harder tricks, often in the same or less time. I just believe I can do it now.”

Panzeri’s winning mindset allowed him to take a devastating situation and turn it into something positive and impactful. Bringing smiles of amazement and joy to his growing fan base, Trickshotdav can be considered as a shining example of what is possible when a positive mindset and consistent hard work is applied when doing something you love.