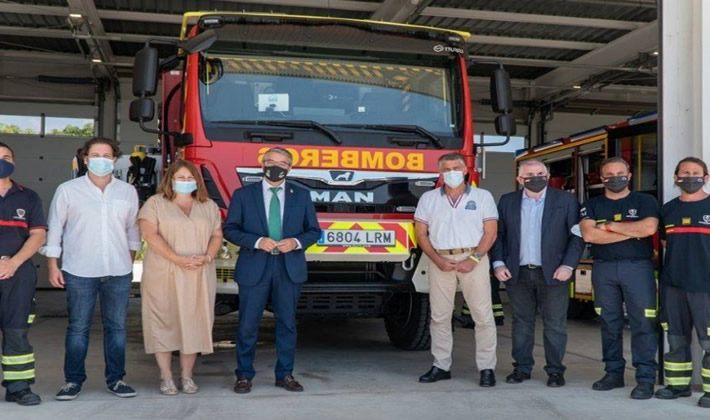 Nerja Fire station took receipt on Friday, July 30, of two new fire engines, courtesy of the Provincial Firefighters Consortium of the Malaga Provincial Council, that will serve to increase the station’s ability to fight urban fires, perform rescues, and tackle forest fires in the municipality.
On Friday morning, Jose Alberto Armijo, the mayor of Nerja, accompanied by Francisco Salado, the provincial president, Manuel Marmolejo, the president of the Consortium, Natacha Rivas, the vice president of the provincial entity, and Franciso Arce, the councillor of Security and Transportation, all attended the presentation at the fire station.
Thanking the Provincial Council for its continued involvement and collaboration, and for providing these new resources, the mayor said, “Years ago, both administrations decided to promote this project, in which few believed, and which has become an indisputable reality, and which is also properly equipped”, while also acknowledging the important work carried out by the firefighters of Nerja.
Mr Saldado added that “with these two new vehicles, safety is guaranteed, not only in the municipality of Nerja, but also in those within the station’s scope of action in the region of La Axarquia, such as Competa, Frigiliana, Sayalonga, and Torrox, mainly”, and stressed, “the Diputación de Malaga cannot skimp on resources to improve the operation of this station, which has an annual average of 250 incidents a year”.
The two new vehicles that take their place with the Nerja fighters are a Bomba Rural Pesada (BRP) fire engine, equipped with all the necessary equipment to deal with accidents both rurally, in forestry, and on the road, and is complete with a 3000-litre water tank, plus 500 litres of self-protection, while the second vehicle is a Light Urban Pump (BUL), a very compact vehicle for actions in urban areas, and has a talk with a capacity of 1800 litres, as reported by 101tv.es.