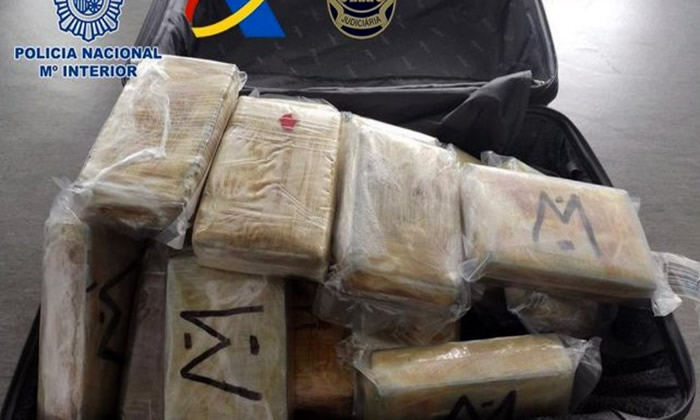 As reported this Saturday, March 26, the National Police, in collaboration with Customs Surveillance and the Portuguese authorities, has dismantled the notorious ‘Fearsome Calin’ drug trafficking organisation.

Fifteen people dedicated to the introduction and distribution of cocaine in Spain were arrested in the operation. They included the leader of the network: Carlos Julio Matos Montero, known as the ‘Fearsome Calin’. Montero was arrested as he was about to catch a flight from Lisbon to his native country of the Dominican Republic.

This is a drug trafficker with a long criminal record, who was being investigated by the National Police since 2019. He is suspected of being responsible for the introduction into Spain of 40 kilos of cocaine through Madrid airport.
Among other records, Matos Montero was arrested in 2014 in the Dominican Republic for the death of Oscar González Matos. He had arrived in that country deported in 2003 after serving a year in prison in a federal prison in the United States. In 2009 he was accused of two murders, and in 2011 of another.

According to the investigators, the detainees controlled numerous points of sale in different parts of the national territory such as Cantabria, Asturias, and Madrid.

The investigation was launched in April 2021 when the police learned that a man of Dominican origin was allegedly responsible for sending a woman to Lanzarote with 60 balls of cocaine. She was subsequently arrested at Madrid airport.

Officers found out that “the fearsome Calin” was behind it, and thanks to the investigations carried out, they identified the member of the organisation in charge of their distribution of cocaine in Asturias and Cantabria.

At the end of February, this gang member travelled to Granada and then returned to Madrid. As a result, several cars were intervened and 3.5 kilos of cocaine was discovered hidden in a concealed compartment. He was arrested, along with two other people, and all were imprisoned.

The final recipient of the drugs, and leader of the organisation was found to have fled to Portugal upon realising the arrests had occurred. A European Arrest Warrant was issued and he was finally arrested by the Portuguese Judiciary Police when he tried to escape from Lisbon.

Two other men who were allegedly responsible for the sale of cocaine and money laundering were also arrested. Investigations pointed out that those two could be the owners of a suitcase seized at Lisbon airport, in October 2021. It contained 30 kilos of cocaine, and two other suitcases were located at the same airport at the end of January 2022, with 50 kilos of the same substance.

Collaboration between the International Cooperation Division and the Interior Attache of the Spanish Embassy in Lisbon made it possible to arrest this March the traveller whose name was on the suitcases, and the presumed owners of the seized cocaine.

Among these six arrested was a woman who used false documentation from Belgium to hide an arrest warrant issued against her for drug trafficking. All those arrested went to prison, as reported by laopiniondemalaga.es.