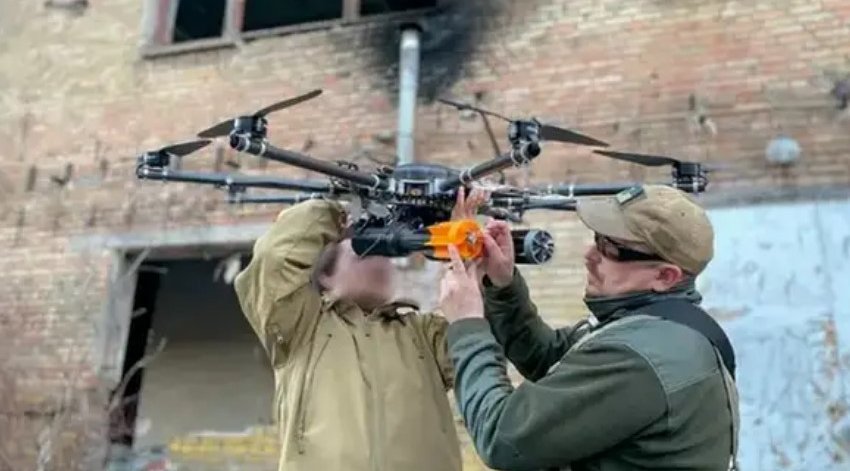 The Ukrainian Armed Forces has a specialised drone air unit called Aerorozvidka. This division was created in 2014 following the Russian annexation of Crimea. Their systems have advanced thermal imaging cameras, and according to published videos and photos, to date, they have managed to destroy, around a hundred key targets.

Made up of 30 specialists, the unit comprises members of the Ukrainian special forces, and drone pilots. Aerorozvidka is financed through a system of crowdfunding, and acquires many of its systems through personal contacts. In this manner, it tries to get the best technology while circumventing export controls that prevent these types of products from reaching Ukraine.

Inventory of the drone unit ranges from cheap commercial models to octocopters that have been modified to launch anti-tank grenades.

Its aircraft are sent on missions to locate and bomb targets from the air, as well as to obtain aerial views of troop movements. As Kiev-based Aerozvidka commander Yaroslav Honchar explained, Russian forces stop moving at night and usually position their tanks between village houses where conventional artillery cannot hit them.

Speaking to The Times, Honchar explained these are the moments his unit takes advantage of “while the Russians sleep”. According to information collected by infoddron.es, this tactic has been fundamental to the success of the guerrilla tactic used by Ukraine, but the unit has been affected by limitations in the supply of drones.

After Elon Musk activated his Starlink satellite system, days after the invasion, it has allowed the unit to carry out up to 300 missions a day. Some of the drones employed are the R18, and the Punisher. The first has a range of 4km, and the second stands out for being able to transport around three kilos of explosives up to 48km away.

The Ukrainian authorities warned this Friday, April 1, that despite the withdrawal of Russian troops from Kyiv and Chernihiv, Moscow is probably planning a new offensive through which to conquer Ukraine before May 9, Victory in Russia Day, as reported by larazon.es.