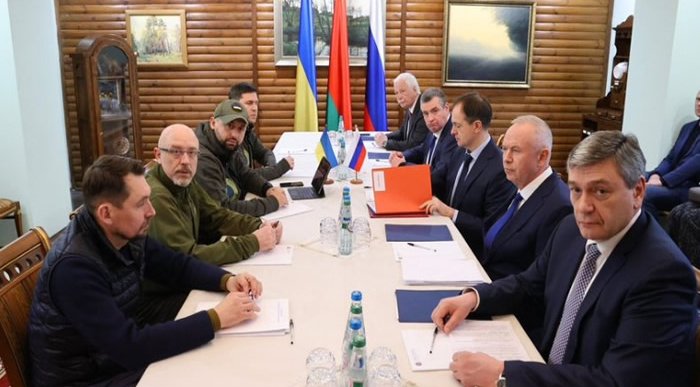 According to an announcement today, Sunday, March 27, by David Arahamiya, a member of the Ukrainian delegation, a new round of negotiations between Moscow and Kyiv are to be held this week in Turkey. They will last for three days, from tomorrow, Monday 28, until Wednesday 30.

His announcement comes after Ukrainian intelligence has assured today that Russian President Vladimir Putin is trying to divide the country in two. After his latest missile attack on the infrastructure of the city of Lviv, they said they are convinced he is trying to create a new North Korea.

This attack on Lviv, a city located just 80km from the Polish border, occurred whilst US President Joe Biden was in the country’s capital, Warsaw.

Turkey has already been the scene of previous attempts between Ukraine and Russia to find a way to end the invasion. Russian Foreign Minister, Sergei Lavrov, and his Ukrainian counterpart, Dmytro Kuleba, met there at the beginning of the month.

Previous meetings between the delegations of both countries have not been successful, and no progress has been made to end the conflict. They have already met three times in Belarus, in addition to the meeting that was held in Turkey.

Vladimir Medinski, the head of the Russian delegation, has confirmed the new round of negotiations on his Telegram channel. “Today, another round of negotiations took place with Ukraine via videoconference. As a result, the decision was made to meet face to face”, he wrote, in a message collected by EFE.

However, Medinski pointed out that the meeting will take place on March 29 and 30, and did not indicate where.

During his visit to Poland on Saturday 26, Joe Biden called Putin a “butcher”, and assured that “he cannot remain in power”. Biden also warned Russia that if it attacked any NATO country, the United States would come into direct conflict, since the Atlantic alliance’s Article 5 of collective defence is “a sacred obligation”.

“As you know, and as you have repeatedly heard us say, we do not have a regime change strategy in Russia, or anywhere else”, Secretary of State Antony Blinken clarified today.

Despite this clarification, the French president, Emmanuel Macron, has urged the need to avoid increasing tension with Russia. In an interview on France 3 TV, collected by Reuters, he assured that he “would not use those words”, as reported by elespanol.com.