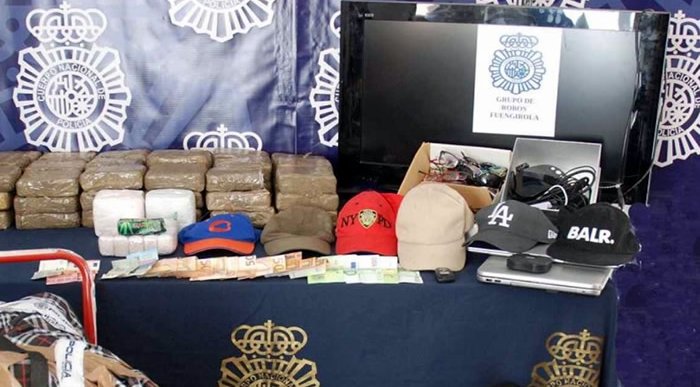 A criminal nicknamed the ‘cap thief’, accused of 29 robberies with force, has been arrested in Fuengirola

National Police officers in the Malaga municipality of Fuengirola have reported the arrest of a thief nicknamed the ‘cap thief’ by local shopkeepers and hoteliers. He is attributed with 29 robberies with force, either in the main town or seafront establishments.

His robberies always involved him covering his features with a scarf and headwear, then escaping from the scene on a powerful electric scooter. Each robbery he would force his way into the premises before stealing money from the tills. After arduous investigations, he was detained on March 30. He was also found to have a hashish plate of about 100 grams on his person.

Among those detained is the brother of the ‘cap thief’, who was with him at the time of arrest. His brother had an outstanding International Arrest Order against him, issued by the Moroccan authorities, for a crime against public health.

Subsequently, a search was carried out in the house of those under investigation, which led to the arrest of four other relatives. They are believed to be members of a clan allegedly dedicated to drug trafficking, operating out of the neighbouring municipality of Mijas.

As a result of the ‘Operation Arrog’ house search, 250 kilograms of hashish, €1,280 in cash, two cars, an electric scooter, a beacon, a safe, a television, two computers, a mobile phone, 35 glasses, a suitcase with mobile phone cases, and pendants, were all seized by the police, as well as various clothing used in the robberies.

As reported by Fuengirola’s judicial authority at Investigating Court No2, a judge has ordered the imprisonment of the principal investigated and his brother, as reported by 101tv.es.