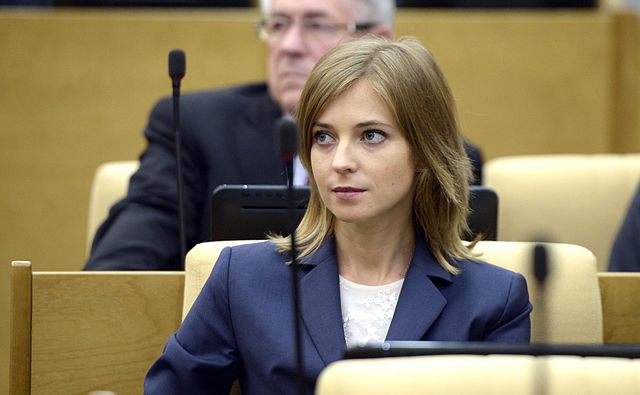 In one of the first public outbursts over the war in Ukraine, an ex-Crimea prosecutor and one time lawmaker slams the uses of Russia’s pro-war Z symbol.

Natalia Poklonskaya has issued a harsh criticism of the pro-war Z symbol, first seen displayed on military vehicles entering Ukraine. The letter has since come to symbolise public support for the invasion of the country of her birth.

In an interview on a popular YouTube channel she said: “This letter Z symbolizes tragedy and grief for both Russia and Ukraine.”

Her comments have however been widely criticised within Russia including from her immediate boss at Russia’s state agency for international outreach, Rossotrudnichestvo. Poklonskaya is currently the Deputy Director after serving a tumultuous term in Russia’s lower house of parliament.

Her boss Yevgeny Primakov said on Wednesday April 20th that the letters Z and V are “symbols of the very liberation of Ukraine from the obvious evil of terrorists and bandits.”

In response to the criticism Poklonskaya wrote: “What I am saying is that it is dangerous to blindly worship any symbols, history does not like that.”

She has previously referred to the invasion as a “catastrophe” and has said: “People are dying, houses and entire cities are destroyed [leaving] millions of refugees. Bodies and souls are mutilated. My heart is bursting with pain.

Her break with Russia’s official line is practically unheard of for a sitting official.

She believes and has said that Ukrainian society has “changed” in the eight years since the war with pro-Russian separatists broke out in the east and that Ukrainians “would not greet Russia with flowers.”

“Ukraine is not Russia.”

Poklonskaya, 42, who slams Russia‘s pro-war ‘Z’ symbol, was a prosecutor in Ukraine until 2014. After she resigned she was appointed prosecutor general of annexed Crimea and in 2016 elected to the lower-house State Duma in 2016  but did not seek re-election in 2021.