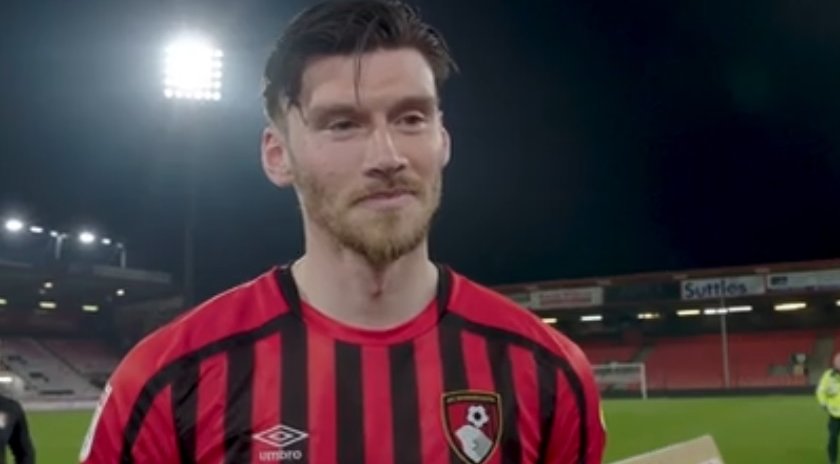 Super-sub Kieffer Moore came to the rescue of Bournemouth (The Cherries) for the second time in a week, scoring a late goal to secure the club’s return to the Premier League.

Kieffer, who scored a brace a week ago against Swansea City, slotted home in the 83rd minute, latching onto a cleverly disguised free-kick. In a winner takes all contest with Nottingham Forest, the Wales striker was once again on form as the Cherries earned a 1-0 victory.

Forest, who were three points behind at the start of the game, knew that they needed to win to guarantee automatic promotion. They had the best of the first half, with Sam Surridge striking the crossbar, as well-being unfortunate not to earn a penalty after a tight offside call went against him.

Bournemouth’s first opening came after Steve Cook’s strong challenge on Dominic Solanke fell at the feet of Billing, who was denied by a diving Brice Samba.

But Surridge almost went one better at the other end on nine minutes. Having been played in on goal by Djed Spence, the former Cherries’ striker broke the offside trap, before slamming against the crossbar left-footed.

A clash of heads, after a corner, saw the game delayed while Nat Phillips and Steve Cook received treatment.

Brennan Johnson then struck over from 20 yards, before then being denied by Jordan Zemura on the line, having been found in space at the back post.

Probably the biggest talking point of the game came when Surridge was brought down Mark Travers in the box, only for play to pull back as the assistant referee had lifted his flag for a tight offside call.

Philip Zinckernagel was denied by Travers as the half ended goalless, with Forest proving the better team

The second half saw a change of fortunes with Bournemouth coming back strongly, working the ball well around the box before Ryan Christie fed a ball through to Solanke, who fired into the side netting.

On the hour mark, Jefferson Lerma hobbled off holding his hamstring, with Moore introduced as his replacement. Successive chances by Bournemouth went begging before the Cherries struck the killer blow.

After Jordan Zemura was fouled on the edge of the box, Billing opted against a shot, instead teeing up Moore to curl into the bottom corner and send Vitality Stadium into raptures.

Although eight minutes of time was added, Bournemouth held out to gain automatic promotion back to the Premier League.