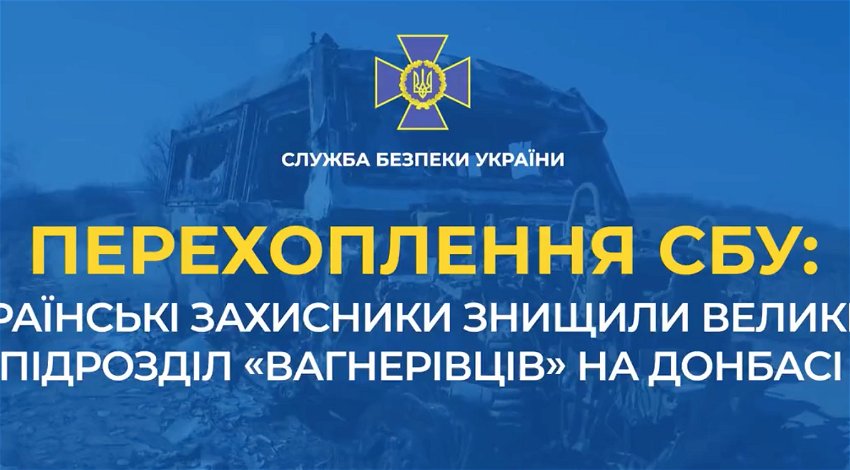 UKRAINE’S military reported on Tuesday, May 31 that they had destroyed a large unit of the Wagner Group – a network of mercenaries and a de facto private army of Russian President Vladimir Putin – in the Donbas region.

Following the killing of a large number of Wagner Group mercenaries, Ukraine’s Security Service has intercepted communications suggesting that ordinary Russian soldiers – who are currently eating dogs in order to survive in Ukraine – are now afraid to fight.

According to the Security Service of Ukraine, Ukrainian guerrillas took out a large group of “Wagnerites” in Donbas and after the destruction of such an “elite unit”, Russian soldiers “are now afraid to fight.”

An intercepted telephone conversation between the guerrillas revealed the death of the highly-trained unit.

“There are a lot of PMC-specialists there, where the border must be taken… But these PMC-specialists are of no use! They all died there, those PMCs,” the correspondence revealed.

“It’s f*cking Special Forces! Trained, f*ckin’ trained! They’re all dead. Well, not all of them, there are some leftovers. I don’t know, I don’t see any other way out of this situation.”

Although not specifically about the Wagner Group, this is not the first phone call intercepted by the security service that has suggested that Russian soldiers do not want to fight anymore and are looking to leave Ukraine as quickly as possible.

According to Ukraine’s Security Service on Sunday, May 29, intercepted telephone calls of Russian soldiers suggested that Russian soldiers are set to leave the war as soon as their operational contract ends.

“Contract servicemen in the Russian army are waiting for the end of June to leave Ukraine as soon as possible.”

“At the end of this month, the 90-day term for “special operations” stipulated by the Russian law will expire. Therefore, those of them who entered Ukraine in February have grounds to “legally” leave the service.”