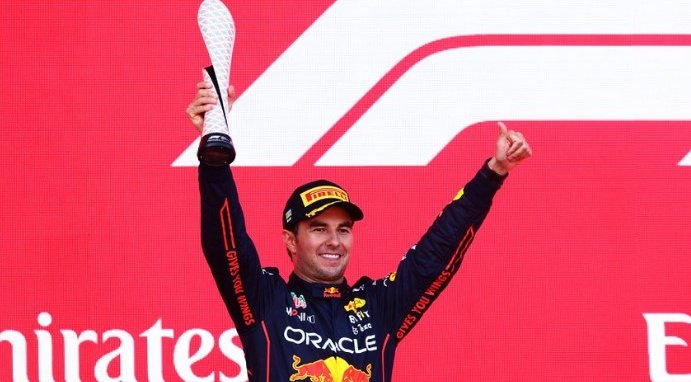 Max Verstappen has moved 34 points clear in the driver’s table after winning the Azerbaijan Grand Prix.

Max Verstappen won the Azerbaijan Grand Prix in Baku this afternoon, Sunday, June 12, to extend his lead at the top of the driver’s championship to 34 points. There is still some way to go, but Red Bull looks to be unbeatable already this season.

Teammate Sergio Perez brought the other Red Bull car home in second place to strengthen the team’s hold on the constructor’s championship too.

Charles LeClerc had started on pole in the Ferrari for the sixth time out of eight races, and his second consecutive pole in Baku. An engine failure put him out of the race though, his second retirement with engine problems already this year, something that will surely cause worry to the Ferrari chiefs after their showing in Monaco.

A stunning move by Perez saw him beat the Frenchman into Turn 1 and into the lead. Verstappen gave chase until the virtual safety car was called upon after Sainz drove his Ferrari into the run-off area on lap nine. Ferrari took advantage of a pit stop, hoping the fresh rubber would give them an edge.

It took the Dutch world champion until lap 15 to gain the lead, with team orders instructing Perez to let him through. Another virtual safety car appeared after an engine failure on Kevin Magnussen’s Haas – also supplied by Ferrari – after which, the race was simply a parade as the Red Bull’s drove to victory.

Britain’s George Russell brought the Mercedes home in third to clinch a podium finish, with his teammate, former world champion Lewis Hamilton fighting through the field to finish behind him in fourth.

Next up, the teams travel across to the other side of the globe for the Canadian Grand Prix in Montreal on Sunday, June 19.

Scenes from our third one-two of the season 🇮🇹🇪🇸🇦🇿 #GivesYouWings pic.twitter.com/8qXeBcIEbw