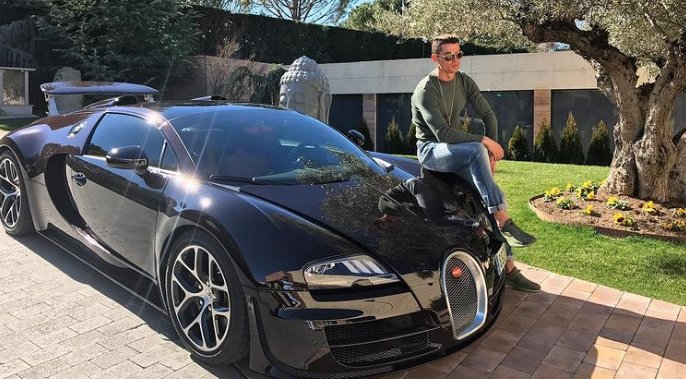 A BUGATTI Veyron supercar owned by Manchester United star Cristiano Ronaldo has been wrecked by one of his employees after it crashed into a house in the municipality of Bunyola, Mallorca.

The two-seater Bugatti Veyron of Cristiano Ronaldo, who has been holidaying in Mallorca since June 14, smashed into a house on Calle Alzina in the Urbanisation of Sa Coma at around 11 am on Monday, June 20.

According to local reports, the €2.1 million supercar, which packs 900 horsepower, was crashed by an employee of the Portuguese superstar into the entrance of a country house.

The employee of the 37-year-old, who is in Mallorca accompanied by his wife, Georgina Rodríguez, and their five children ahead of the new Premier League season, did not suffer any injuries following the accident, however, the front of the car was completely smashed.

Cristiano Ronaldo 's Bugatti Veyron suffered an accident on Monday morning in Mallorca. Apparently Cristiano was not inside the vehicle. [@UHmallorca] #mufc pic.twitter.com/WtG5crWWsd

On Sunday, June 19, Georgina Rodriguez took to Instagram to share some holiday photos of the Ronaldo family enjoying the Mallorcan sun.

Georgina, who is a model, dancer and influencer with over 30 million followers on IG, posted: “A magical and special day ❤️🌴#family #love”.

Ronaldo recently received some good news after a rape allegation lawsuit in Las Vegas, on Friday, June 10 was dismissed by US District Judge Jennifer Dorsey.

The allegation had originally been brought against the 37-year-old Portuguese footballer in 2009 by Kathryn Mayorga, a resident of Nevada.

Ronaldo paid her £290,000 (€339,000) in hush money at the time, but then Ms Mayorga’s lawsuit sought a further payment from the now Manchester United player.

He always vehemently denied the allegation and said the sexual relationship had been consensual between himself and the model.