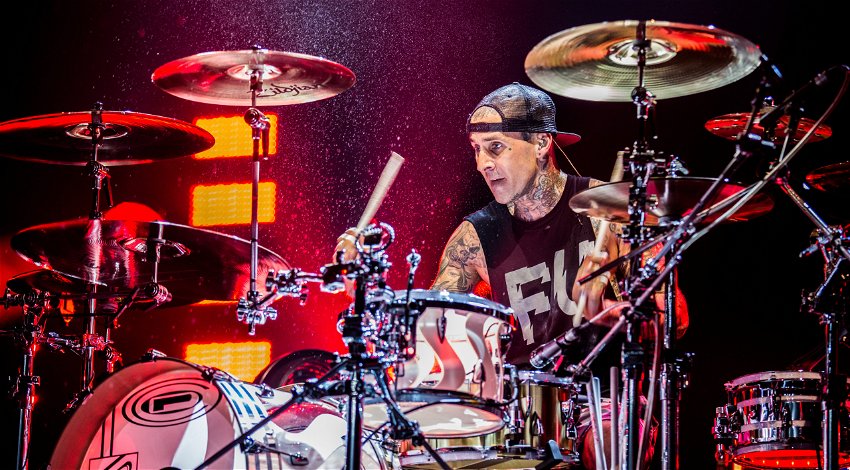 BLINK-182 drummer Travis Barker was rushed to hospital late on Tuesday, June 28, after suffering an unknown medical emergency – he is now said to be recovering from surgery.

UPDATE 4.48 pm (June 30) – The daughter of Blink-182 drummer Travis Barker thanked fans for prayers following reports that the rocker had to have a colonoscopy. He was admitted to Cedars-Sinai Medical Centre in Los Angeles with pancreatitis.

Sixteen-year-old Alabama said on Instagram: “Thank you guys for all of the prayers and love, I appreciate you and love all of you.”

The sentiment was shared by the 46-year-old’s former stepdaughter Atiana De La Hoya, 23, who posted on IG Stories: “Thank you for the outpouring of love and prayers sent our way at this time.

“It is heard, felt and appreciated.”

TMZ broke the news that Travis had been admitted to hospital with pancreatitis – redness and swelling (inflammation) of the pancreas – after he posted on Twitter: “God save me”.

According to the Sun, “Travis underwent a procedure on Tuesday after being rushed to hospital, but the family do no want to release any further details at the moment.

“He is not in ICU, and is now on a normal floor recovering,” the tabloid’s source revealed.

ORIGINAL 9.15 am (June 29) – Taking to Twitter, Travis Barker tweeted ‘God save me’ and his 16-year-old daughter Alabama asked for prayers as reports rolled in that the musician had been rushed to hospital.

In photos taken by TMZ, Travis was spotted on a stretcher arriving at Cedars-Sinai Medical Centre in Los Angeles with his new wife Kourtney Kardashian, who he wed last month in Portofino, Italy.

According to TMZ, Barker was initially taken to West Hills hospital, however, his medical emergency was deemed to be more serious and required him to be transferred by ambulance to Cedars-Sinai Medical Centre.

Some people on social media have linked the star’s sudden medical emergency to an interview he gave on the Joe Rogan Experience a few years ago.

In an interview with Joe Rogan back in 2019, Barker said that he was suffering from trigeminal neuralgia – dubbed the suicide disease.

During the interview, the drummer confessed to having the disease after mentioning his use of CBD.

“I have Trigeminal Neuralgia. Have you heard of it? It’s the worst. It’s called the suicide disease,” he told the popular podcast host.

“Basically all of the nerves in your face are firing all at the same time. So it almost feels like what you feel when you think you need a root canal or you have a tooth that’s messed up,” Travis Barker said.

Barker, who has been a vegan for over a decade and opened up the Crossroads Kitchen in Los Angeles, has been with Blink-182 on two separate occasions; from 1998–2005 and then again from 2009 to the present day.

In 2008, he was involved in a plane crash, after which he vowed to switch to vegan after being a vegetarian since the age of 15.