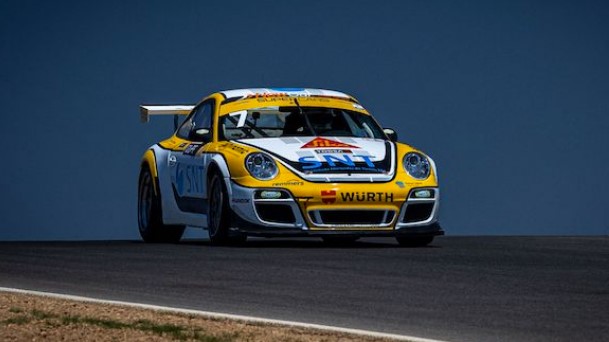 Image of Alvaro Fontes in the Porsche. Credit: [email protected]

Alvaro Fontes, the racing driver from Malaga, was victorious at the Autodromo Internacional do Algarve in Portugal last weekend.

Malaga racing driver Alvaro Fontes produced a superb performance in the Supercars Endurance this weekend, as he participated in the second round of the season at the Autodromo Internacional do Algarve in Portugal.

Sharing the wheel of the Fabela Sport Porsche 997 with Bruno Pires, he had already won on two previous occasions in Portimao in the GT3 Cup. In May, Fontes already secured two second places at the Jarama circuit in Madrid.

Fontes not only obtained victory in his GTC category but also finished first overall in the first race and third in the second. In the free practice held on Saturday morning, July 30, Fontes showed a rapid adaptation to driving the Porsche that was later revealed in qualifying.

The two 45-minute races were held On Sunday, August 1, they competed in two races, each of 45 minutes. In the first one, Fontes maintained the lead throughout his stint before handing it over to Pires. The Portuguese took the car to the finish line with a seven-second advantage.

In the second outing, despite a drive-through penalty, Pires first, and then Fontes, claimed victory in the GTC. They were also third overall, rounding off another weekend in which the man from Malaga never left the podium.

“I am very happy with the results. It is always positive when you finish on the podium, and even more so if you climb to the top step of the box. I have found myself comfortable with the Porsche, a vehicle with sequential gearboxes, that we could define as pure driving”, explained Fontes.

The Andalucian added that: “I was able to help my teammate and my team in their fight for the championship. We got along perfectly and, if it hadn’t been for the drive-through in the second race, I think we were in a position to fight for outright victory again”.