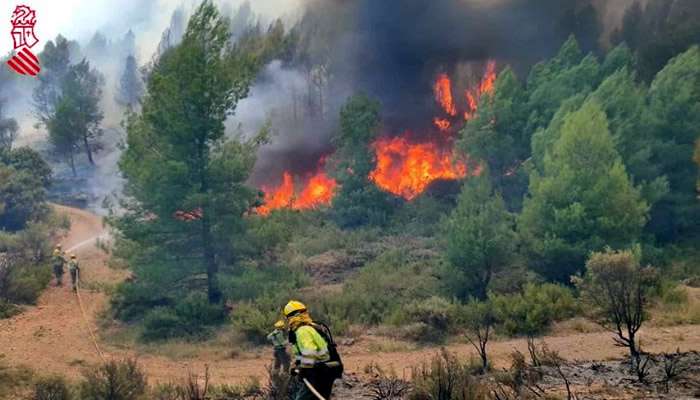 The Valencian Community’s worst forest fire in 30 years, in the Bejis region of Castellon province, has finally been declared stabilised.

Excellent news was announced to the Valencian Community at 8:30pm this evening, Sunday, August 21, by Gabriela Bravo, the Minister of the Interior. She confirmed that the forest fire that had been raging out of control in the Bejis region of Castellon province was finally declared stabilised.

Since Monday, August 15, more than 300 ground personnel, supported by 12 aerial resources, have been battling the inferno that broke out. The fire is stabilised but it could still flare up at any moment, so the perimeter will be monitored for signs of any hotspots.

A rough estimate of the widespread damage caused by the fire stands at around 19,000 hectares. The Bejis fire has already gone down in history as the worst in the community for 30 years.

Residents of the towns of Teresa, and Sacañet, have been told to return to their homes, along with the villagers of Andilla. All roads in the area have been opened once again.

Ximo Puig, the president of the Community confirmed this morning that: “Everybody will be able to return from any municipality or district to their homes. The situation of the Bejis fire is favourable on a very unfavourable day in terms of weather. The entire Valencian Community is today on high alert and a fire can occur anywhere due to the situation we are experiencing”.

He continued: “That is why we want extreme caution. Despite the fact that people can return home, it is not the right time to travel along these roads, which are still in the midst of intense work by firefighters.  It would make it difficult to react in the face of some outbreaks that are taking place, especially in the El Toro area, where there are very hot spots”.

After a meeting at the Advanced Command Post, Puig thanked the “enormous” work of the firefighters, the Guardia Civil, and the UME “which is doing an extraordinary job”.

Some of the aerial means have already been withdrawn, but Puig has stressed that: “We must exercise extreme caution, especially in those areas where it is very hot because during the day there have been some outbreaks. This is the state of the matter, a moderate optimism”.

The UME will maintain almost all of its units until Sunday night, while several state planes have already left the area. “We are in the process of stabilising”, reiterated Puig this morning, “but the fire is still active. It is time to return to normality with caution”, he stressed.

“The perimeter is maintained and then we will see what has been burned within that area, and what has not. We have seen that within Bejis there are ‘islands’ that have not burned”, he added, as reported by lasprovincias.es.