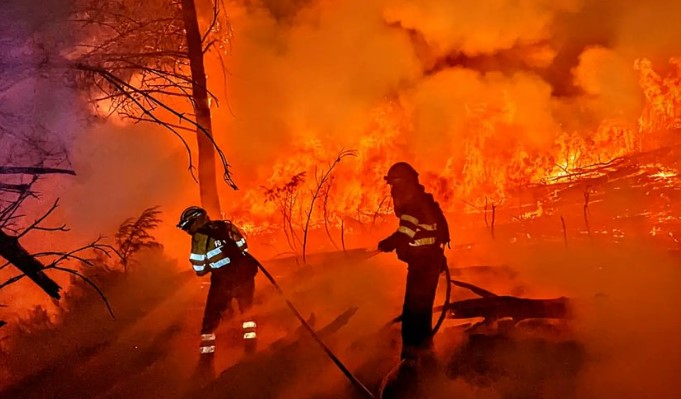 Image of the forest fire in the Valencian municipality of Bejis. Credit: [email protected]

After overnight showers helped to dampen the flames of the fire in the Valencian municipality of Bejis, strong winds reignited the ‘out of control’ blaze.

Overnight rainfall gave firefighters in the Valencian Community some hope of respite from the forest fire that has been burning now for three days in the municipality of Bejis. Flames along the perimeter of the fire had been extinguished by the rain but sudden strong winds reignited some pockets.

As confirmed by Las Provincias, the blaze subsequently advanced towards the town of Altura and the church of Cueva Santa, located on the edge of the Sierra Calderona Natural Park. As confirmed this afternoon, Thursday, August 18, by the minister Gabriela Bravo, in A Punt, “the southern front is worrying”.

As a result of the unstoppable spread of the flames – which are being fed by the winds – the decision was made to evacuate the population of the town of Alcublas. Several more municipalities have been affected this afternoon. These include Andilla, La Pobleta, Oset, and Artaj.

As reported by the forest fire service of the GVA on their official Twitter account this afternoon, the gusts of wind in the area make it impossible for forest firefighters and personnel belonging to the Diputacion de Castellon to carry out extinction tasks in the area.

A spokesperson for the Advanced Command Post said that “due to the effects of the smoke” the population of Alcublas has been confined. In mid-afternoon, the confinement of the town of Andilla was announced.

The Council recommended that “the people who are in Andilla, La Pobleta, Artaj, Osset, and scattered throughout the Pardanchinos area, Casa La Señora… in their second residences, move to their habitual residence”. Those living in Artaj and Oset have been evacuated according to the Advanced Command Post.

112 of the Generalitat Valenciana reported that up to 20 litres of rainfall had been registered in the area of the Bejis fire since the afternoon of Wednesday, August 17. These rains ‘have reduced the flames to the point of almost disappearing around the perimeter’, they said. They later added that a ‘positive humidity input had been registered, although ‘there are still very hot areas’.

A decision is expected to be made later this afternoon to allow residents of Alto Palancia to possibly return to their homes.

Another fire that had been burning in Vall d’Ebo has been extinguished by the more than 40 litres of rainfall that the area received. “There is no flame on any front”, according to a tweet from 112. “The perimeter is more stable after the rains. There has been a small reproduction in the Benimassot area but it is already controlled”, said their message.