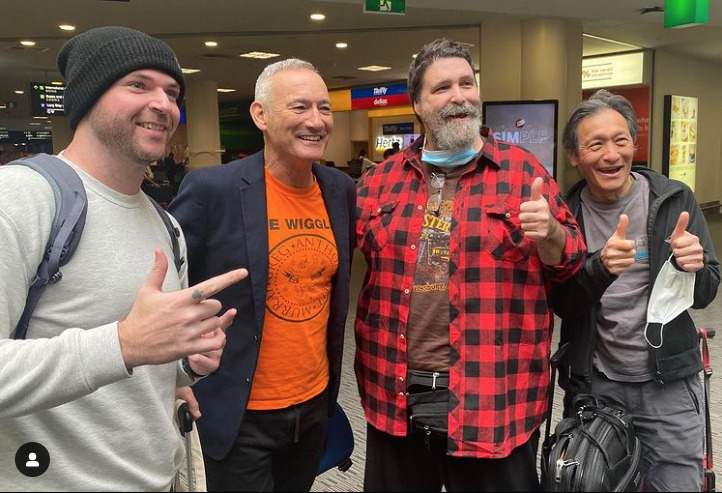 Taking to social media on Thursday, August 25, the ‘Hardcore Legend’ Mick Foley revealed that he bumped into The Wiggles at baggage claim in Christchurch airport in New Zealand.

The 57-year-old, who is also a New York Times best-selling author, shared a story with his 208k followers about the Australian children’s entertainers.

“KEEP ON WIGGLING!” he wrote.

“What a surprise it was to run into @thewiggles at the baggage claim in #Christchurch New Zealand!”

He added: “True story, I once took Dewey and Noelle to a great Wiggles show at Radio City Music Hall in 1998 or 1999.

“In appreciation for the years of entertainment, these awesome Aussies have provided all four Foley children, we did a rousing sing-a-long of “Fruit Salad” at last night’s show!”

The former WWE champion has been on tour down under. He has appeared in select cities in Australia and New Zealand as part of his ‘Nice Day Tour’.

According to his website, the former pro-wrestler recounts “some of his greatest stories from his hit autobiography ‘Have a Nice Day!’ and shares his memories of some of the most infamous moments in pro wrestling history!”

Mick Foley, who wrestled for all of the major pro-wrestling companies during his career, was a major part of the Attitude Era, a period in pro-wrestling that proved extremely popular with fans.

Fans on IG reacted to the picture.

One person wrote: “That’s so awesome 🙂”

While another said: “There’s got to be video somewhere!!!”

“@RealMickFoley and The Wiggles…this is a weird timeline,” another wrote on Twitter.