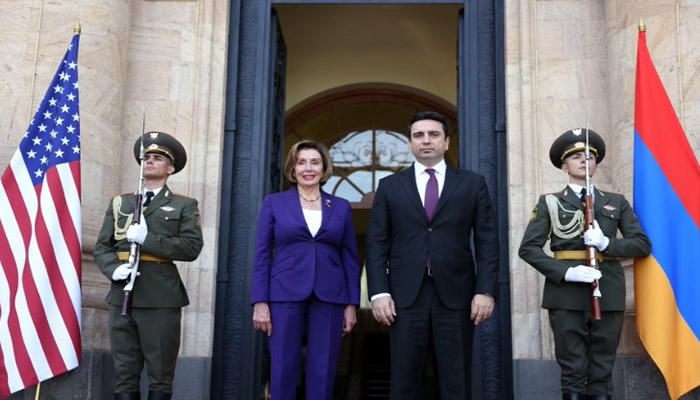 Turkey has deployed around 45,000 troops to the Armenian border according to Iran’s Revolutionary Guards.

According to UKR Report this evening, Monday, September 19, Iran’s Revolutionary Guards have claimed that Turkey has deployed around 45,000 troops to the Armenian border. The recent ceasefire between Azerbaijan and Armenia appears to be holding for the moment but Turkey is a known ally of Baku. Iran already reportedly dispatched military forces last week to its border with Armenia.

🇮🇷🇹🇷🇦🇲Iran's Revolutionary Guards claimed that Turkey had dispatched 45,000 soldiers to the border with Armenia.

Following Azerbaijan’s attacks on Armenia last week, Nancy Pelosi, the US Speaker of the House flew into the Armenian capital of Yerevan heading a Congressional delegation. Her objective was to try and bring calm to the region but her presence has not gone down so well with everybody.

Earlier today, Reuters reported Fuat Oktay, the Turkish vice-President describing Pelosi’s statements about the recent attacks on Armenia being an ‘illegal assault’ as unacceptable. Oktay said her visit and subsequent comments about the Azerbaijan-Armenia conflict were ‘sabotaging diplomatic efforts’.

The vice-president even took to Twitter where he asked officials in Washington to clarify if her comments represented America’s stance on the conflict.

Meanwhile, as reported by gerceknews.com, Mustafa Destici, the leader of Turkey’s ultranationalist Great Unity Party (BBP), had strong words on the situation. “I remind you once again that the Turkish nation has the power to erase Armenia from history and geography, and that they stand at the limit of our patience”, he warned today.

Mustafa Destici, the leader of Great Turkey or BBP (ethnocentrist-islamist),has threatened to massacre Armenia.
Maybe no one knows that Muhsin Yazıcıoğlu,the previous leader of BBP, was one of the perpetrators of the massacre of Shia Alawites in the «Kahraman maraş»
No wonder! pic.twitter.com/nFSJAptH6E

Destici reiterated his support for the Baku government following last week’s clashes. He called Greece and Armenia ‘made-up, barrier and puppet states’, that were acting in an ‘aggressive and unlawful’ manner.

He stressed: “Turkey will never hesitate to enter a conflict when it comes to the security of its own country, borders, nation, and brothers”. The politician assured that no matter who is backing Greece and Armenia, Turkey has the strength, the will, and the determination to crush them both.

Supporters of the two countries in Turkey were branded as ‘separatists, traitors, imperialists, and internal collaborators’ by Destici, claiming their only motive is to manipulate the politics of Turkey while supporting the country’s opposition parties.