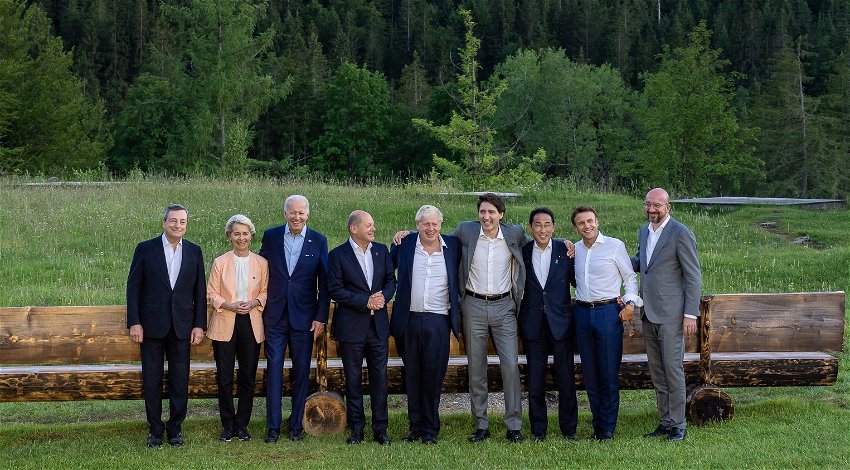 The meeting comes in the wake of Putin’s illegal annexation of four Ukrainian territories and a brutal assault on Ukrainian civilians in Kyiv and elsewhere.

The Prime Minister will ask countries to maintain biting sanctions and call for a full meeting of NATO leaders in the coming days.

G7 leaders will meet today (Tuesday 11 October) to reiterate the unity of opposition to Putin’s continued brutality in Ukraine.

In the last 24 hours, Russia has stepped up its attacks on Ukrainian cities like Kyiv, killing civilians and cutting off electricity and communications. This follows Putin’s orchestration of sham referendums in an attempt to annex four Ukrainian regions.

Today’s video call, which will also be attended by President Zelenskyy, is the first gathering of all G7 leaders since Ukraine’s counter-offensive started to take hold in Ukraine.

The Prime Minister will use the call to urge fellow leaders to stay the course. She will point out that Ukraine’s military advances have been made possible thanks to the international support they are receiving – not just in terms of military aid, but also humanitarian assistance and the impact of western sanctions against Russia.

The Prime Minister is also calling for an urgent meeting of NATO leaders, ensuring allies remain united and resolute in their opposition to Putin’s behaviour.

“The overwhelming international support for Ukraine’s struggle stands in stark opposition to the isolation of Russia on the international stage. Their bravery in the face of the most brutal acts of violence has earned the people of Ukraine global admiration. Nobody wants peace more than Ukraine. And for our part, we must not waver one iota in our resolve to help them win it.”

Yesterday the Prime Minister spoke to President Zelenskyy to condemn the recent attacks on Kyiv and the annexation of Ukrainian territories, and to reiterate the UK’s support.

This year the UK has committed £2.3 billion in military support to Ukraine, which has enabled the provision of Multiple Launch Rocket Systems, hundreds of rockets, thousands of rounds of ammunition, crucial defence vehicles and five air defence systems including Starstreak.

As the Ukrainian Armed Forces face a difficult winter, the UK is also providing critical cold weather gear and other forms of non-lethal support to bolster their resilience.

Later this week, all UN members will vote on Russia’s breach of the UN Charter with its annexation of Donetsk, Luhansk, Kherson and Zaporizhzhia. 141 UN member states voted to condemn Putin’s full-scale invasion of Ukraine in March, and earlier this month the majority of UN Security Council members voted against the recent annexations.

In their meeting today, G7 leaders are also expected to discuss the global energy crisis precipitated by Putin’s actions. The group is currently working to finalise and implement an international cap on the price of Russian oil, which will further damage Putin’s revenue stream.

The Prime Minister will point to this action as evidence of what the G7 can do both to constrain Putin and act as an economic NATO, defending our countries’ interests.

The Prime Minister is working with fellow leaders to increase our energy independence and end the global reliance on malign states, such as Russia, in our critical resources.