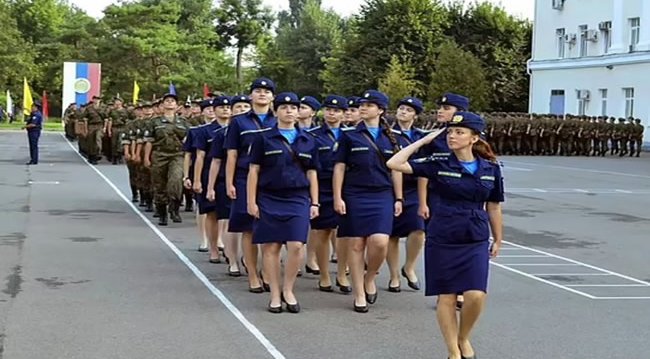 A batch of 16 ‘angels of death’ have graduated as military pilots and will become a part of the Russian Air Force.

A passing out parade today, Sunday, October 30, in the Russian city of Krasnodar, saw Vladimir Putin’s latest addition to his military forces rolled out. His ‘angels of death’, female pilots who have recently graduated from the Serov Higher Military Aviation School, marched in front of the Russian president.

They are the first women to become Russian military pilots since Josef Stalin allowed females into the Russian Air Force during World War II. As they paraded in front of their leader, the women tossed coins and flower petals into the air.

This batch of 16 women has been fully trained to fly strategic nuclear bombers and transport planes. Putin’s ‘angels of death’ continue a glorious tradition in the Russian Air Force commented Sergei Shoigu, the Defence Minister. “You are a reference point and an example for those girls who will follow you”, he exclaimed.

Female pilots are no strangers to ariel combat in the Russian military. During World War II, 23 women were awarded the honour of ‘Hero of the USSR’. Shoigu selected Anna Shcherbakova, a pilot from the city of Perm, as this year’s applicant for the award. She graduated with 15 other women among 400 newly-qualified military pilots.

Qualifying as a military pilot is not an easy affair in Russia. Today’s graduates had undergone an arduous five-year course. In 2017, the applicants were told by Colonel Oleg Pchela, ‘Girls are usually very romantic”.

“They have good motivation that will allow them to learn how to fly our military planes and to perform the tasks of their commanders. It is a highly responsible job to become a military pilot. It is a hard occupation, it demands high moral values too”, Pchela emphasised to the hopeful women, as reported by dailymail.co.uk.