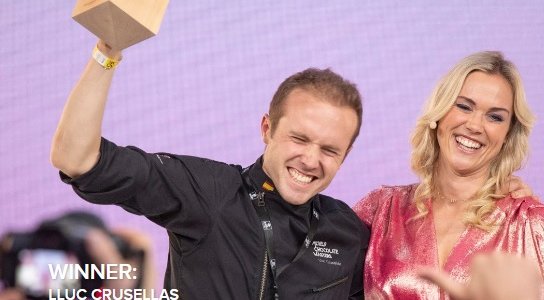 The king of chocolate title has gone to Catalan chef Lluc Crusellas has who won the eighth edition of the World Chocolate Masters competition.

The chef took the title on the evening of Monday, October 31 at an event in Paris, where he beat 17 chefs from around the world to take the title. He is the first Spaniard to be crowned as the World Chocolate Master.

He told the audience: “It has been an incredible journey.”

He continued saying all the hard work had paid off and that as a young man his ambition now was to make an even bigger impression on the world of cooking.

Crusellas, just 26, said that his chocolate creation was inspired by the natural environments of the mountain and his love of cycling. His creation included unique techniques that gave textures to leaves, providing an organic and natural touch to the dishes presented.

He told La Sexta that his passion for cooking started after he left school at the age of 18. He went to work in the dessert section of the restaurant Can Jubany de Calldetenes, in the province of Barcelona, which has a Michelin star.

That experience led him into the world of pastry where he undertook further training in prestigious institutions in Barcelona such as EspaiSucre and Hofmann. He is currently the head pastry chef at El Carme Patisseriade Vic, also in the province of Barcelona.

18 chefs participated in the tournament with the second place going to Frenchman Antoine Carréric and third place Greek Nicolas Nikolakopoulos.

Judges and colleagues praised his work and his techniques in handling chocolate as he becomes the king of chocolate.