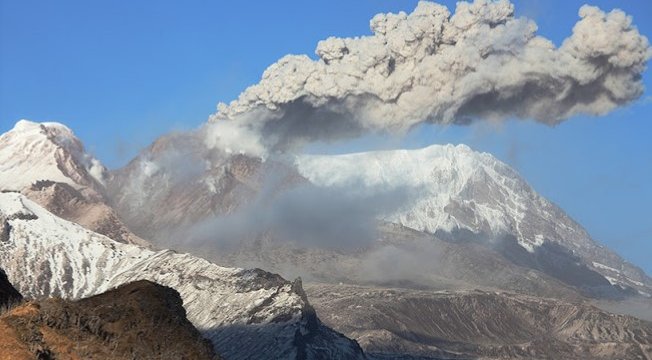 Image of the Shiveluch volcano in Siberia circa 2013. Credit: Google maps - mary vernacchio

A powerful eruption is on the verge of occurring say experts as the cone of Siberia’s giant Shiveluch stratovolcano starts glowing and lava flows down its slopes.

According to experts on Sunday, November 20, the Shiveluch stratovolcano in Kamchatka Krai is extremely active and on the verge of what could be a powerful eruption any time soon. This was explained to RIA Novosti by the Institute of Volcanology and Seismology of the Far East Branch of the Russian Academy of Sciences.

“A growth of the lava dome continues, a strong fumaroles activity, an incandescence of the lava dome, explosions, and hot avalanches accompanies this process”, said a spokesperson for the observatory on Sunday.

“Ash explosions up to 10-15kms (9.32 miles) could occur at any time. Ongoing activity could affect international and low-flying aircraft”, they added. On Saturday 19, a volcanic ash plume rising up to around 13000ft in altitude was recorded by the observatory.

Hot avalanches with a temperature of around 1000°C are already rolling down the slope of the Siberian volcano. These pyroclastic flows will eventually begin to descend at a higher speed accompanied by ash emissions. A collapse is also likely added the experts, as reported by gazeta.ru.

Ash falls are expected in nearby settlements. There is a possibility that the lava streams could cover a distance of up to 20km and block the main Petropavlovsk-Kamchatsky to Ust-Kamchatsk road.
A recommendation has been issued that nobody approaches within a distance of 15km of the volcano.

Alexei Ozerov, the institute’s director, pointed out that the dome of the volcano is very hot. In the dark, its glow is visibly observed. “This state of the dome is observed, as a rule, before a powerful paroxysmal eruption”, the scientist concluded.

Also in Kamchatka, the 15,584-ft Klyuchevskoy volcano has been erupting regularly. It is the highest mountain peak in Siberia and the highest active volcano in Eurasia. Featuring about 70 craters, Klyuchevskoy is one of the highest in the world.