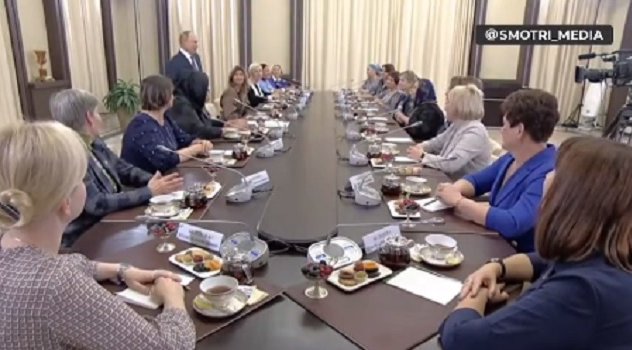 Russian President Vladimir Putin has told angry mothers with who he met “I feel your pain” but you must not believe everything you read or see on TV and online.

According to the Telegraph, Putin met with a group of very angry mothers on Friday, November 25 in a carefully choreographed meeting at one of his residences on the outskirts of Moscow.

He told them: “I would like you to know that I personally, and the whole leadership of the country, share your pain.”

A video released by the Kremlin show each of the women sitting in front of a microphone in a formal boardroom along with a cup of tea and a small plate of pastries. The video has been put together in time to mark Sunday’s mother’s day in Russia.

Playing the part of the saddened leader he told them:  “We understand that nothing can replace the loss of a son, especially for a mother.”

Putin continued telling the mothers not to believe everything they see on television or read on the internet, claiming there were many “fakes” circulating about the conflict.

"I would like you to know that I personally, and the whole leadership of the country, we share your pain."

Vladimir Putin meets with more than a dozen mothers of Russian soldiers fighting in Ukraine.

He also told them to not trust what they saw on the internet or TV. pic.twitter.com/8pGbwN9kMz

But some mothers have also criticised the leader for failing to agree a meeting with those who had lost loved ones in the conflict.

Olga Tsukanova, Head of the Council of Mothers and Wives, said: “The mothers will ask the ‘correct’ questions that were agreed beforehand.

“Vladimir Vladimirovich – are you a man or who are you? Do you have the courage to meet us face to face, openly, not with pre-agreed women and mothers who are in your pocket, but with real women who have travelled from different cities here to meet with you? We await your answer.”

Putin confirmed at a meeting with mothers that the mobilization in the country has ended. pic.twitter.com/RQnfPSkKam

The video marks a rare admission of Russian suffering caused by his “special operation” in Ukraine, however, he has yet to show any sign that he is willing to bring the conflict to an end.

Russia has acknowledged the death of around 6,000 soldiers although international estimates put the figure somewhere between 40 and 100,000.

With so many deaths at the hands of the dictator, his comments that “I feel your pain” remain hollow and are unlikely to appeal anyone other than those hardened Putin supporters.