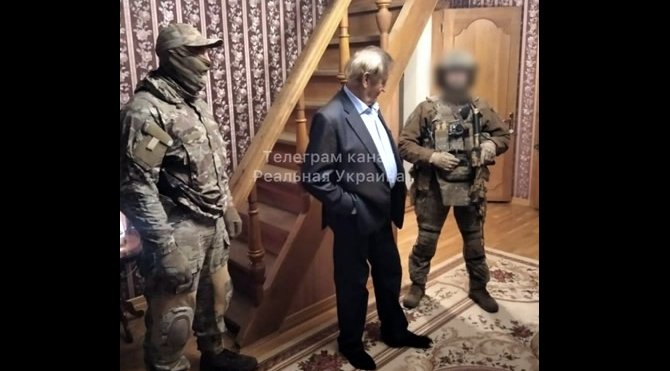 Image of Vyacheslav Boguslaev with the SBU. Credit: [email protected]

SBU officers uncovered items worth a small fortune when they raided the home of Putin’s ally, Vyacheslav Boguslaev, the Ukrainian businessman.

A raid by officers from the Security Service of Ukraine (SBU) on the home of an ally of Vladimir Putin’s reportedly uncovered a treasure trove of guns, antiques, and high-end supercars. Vyacheslav Boguslaev, the president of the Ukrainian Motor Sich industrial giant, was detained back in October.

The raid – and subsequent seizure of artefacts worth a small fortune  – was reported by the SBU on Thursday, November 24, and confirmed by the Office of the Prosecutor General of Ukraine. Images released of the confiscated items revealed Scythian gold and objects dating back to the Kyivan Rus era of ancient times.

In order to obtain information that led to the raid being conducted, ‘psychological pressure’ was put on Boguslaev said SBU officials. The president of one of Ukraine’s largest industrial enterprises stands accused of ‘treason’ by supplying Russia with aircraft engines.

“The security service searched the assets of the president of JSC ‘Motor Sich’ worth hundreds of millions of hryvnias. They tried to secretly take this property out of Ukraine in order to avoid its arrest as part of criminal proceedings”, read an SBU statement on its official Telegram channel.

It continued: “As a result of investigative and operative actions, the participants of the arrangement were identified. They turned out to be several managers of the plant’s structural divisions”.

“During the searches, law enforcement officers discovered and seized: 7 luxury cars, including 4 rare ones; a cutter (boat); 3 hunting rifles and a rifle; and a large number of antiquities from European nations”.

“In addition, the SBU exposed other representatives of the immediate circle of the ‘Iskander-M lover’ who encouraged the plant’s employees to collect signatures under a ‘collective appeal’ to ease the measure of the preventive measure for their manager”.

“We will remind that counter-intelligence and SBU investigators detained the president of Motor Sich JSC and the head of one of the company’s departments in October of this year”.

“According to the investigation, the management of the plant in Zaporizhzhia established transnational channels for the illegal supply of wholesale batches of Ukrainian aircraft engines to the Russian Federation”.

“Currently, a pre-trial investigation is underway to establish all the circumstances of criminal activity and bring the guilty parties to justice”, the statement concluded.