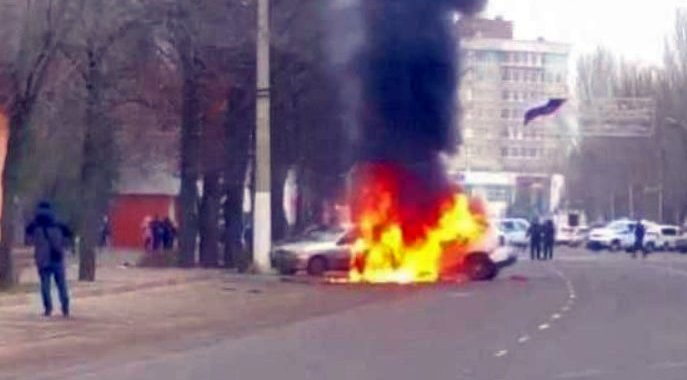 A car bomb exploded today, Friday, December 23, in the Russian-occupied city of Melitopol in Ukraine. The two occupants of the vehicle are believed to be FSB officers. They were both seriously injured in the blast, with some reports saying one of them lost some limbs.

Ivan Federov, the city’s mayor, posted on his Telegram channel to reveal that according to preliminary information, the car involved in the incident was a Renault Duster. “According to eyewitnesses, the car used by the Russians was blown up. Information about the passengers and their condition is being clarified”, he added later.

💥 A loud explosion rang out in the centre of temporarily occupied Melitopol – Mayor Fedorov.

"According to eyewitnesses, the car used by the ruscists was blown up. Information about the passengers and their condition is being clarified," the report says.

It was reported online that the engine compartment of the car exploded while at 1213 at the entrance to Gorky Park in the city centre. One of the men is said to be Andrii Blavatsky, a former employee of the internal security of the National Police, who is a suspected police officer-collaborator.

There was an explosion in Melitopol, a car was blown up. According to Russian sources, “saboteurs blew up a car where two persons of Russian special services were driving. Both were seriously injured, one of them had a limb torn off.” pic.twitter.com/N65ie2hzvg

🚨#BREAKING: According to preliminary information, there were two #FSB officers in the blown up car in #Melitopol. They were seriously wounded. pic.twitter.com/FN76o5mxRB

A post on the Ria-Melitopol Telegram channel detailed what was known so far: “Two FSB officers were blown up in Melitopol – details emerged. Minus two members of the Russian special services. One is almost dead, the other incapacitated and for a long time”.

“According to our source, in the white Renault Duster that caught fire from the explosion were two FSB officers of non-Slavic appearance. The day before they had visited a gym near Kirov Market – the so-called Steklyashka. Both always distinguished themselves by leaving their cars far away and walking to their workout”.

“This morning, after their workout, they both went for a coffee at the cake shop on Bogdan Khmelnytskyi Avenue”.

“They then got into the car and as they were reversing, there was a detonation in the engine compartment. One’s leg was blown off after the explosion. On the part of the second security service officer, the door in the car jammed and he was effectively burned alive. There was practically no chance of him surviving”.