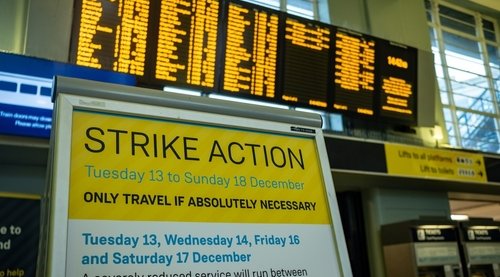 14:57 (January 6) – Prime Minster Rishi Sunak has responded to claims that the proposed “anti-strike” laws are illegal, saying they are “entirely reasonable.”

Sunak, who has called a meeting of all union leaders for Monday, was talking to reporters following a local visit on Friday, January 6.

In response to a question around unions he said: “I fully believe in the unions’ role in our society and the freedom for them to strike but I also believe that that should be balanced with the right of ordinary working people to go about their lives, free from significant disruption.

“That is why we are going to bring forward new laws, in common with countries like France, Italy, Spain and others, that ensure we have minimum levels of safety in critical areas like fire, like ambulance, so that even when strikes are going on you know that your health will be protected. I think that is entirely reasonable and that is what our new laws will do.”

11:47 (January 6) – The unions and the government are set to clash over the proposed new minimum service levels for essential services which have been referred to by some as “anti-strike” laws.

RMT General Secretary Mick Lynch said on Friday, January 6 that a top solicitor had advised him that any such law would be illegal, adding that Rishi Sunak´s plans would effectively “conscript members and curtail their rights to strike.”

The comments come after the Government revealed its plans to implement laws similar to those in Spain that would require fire, ambulance and rail services to maintain minimum service levels during strikes.

If approved, the law would see some union members having to work even if they have voted to strike, as it would organisations being allowed to seek injunctions to force employees back to work as it would the possibility of unions being sued for damages.

Lynch who was speaking to the BBC at the start of the latest walkout said that he had consulted a QC or as they are known following the Queen´s death a KC.

He said: “What this is a symbol of is the Government losing the argument.

“They’ve lost the argument on austerity and pay, and the state of our national public services.

“And instead they want to close that argument down by closing down the unions and stopping us from campaigning against poverty.

“We’ll have to see if it’s compliant with international law. We don’t think it is.

“We’ve got a QC’s [sic] opinion that much of what they’ve got in mind could be completely illegal.”

The statements come as the Trade Unions Congress (TUC) said that they would fight the law in the courts, although it may not get to that as it could be blocked in the House of Lords.

Labour has said if they get into power they would repeal the law, with the bill due to be introduced into parliament sometime next week. Included in the proposals are minimum service levels for health, education, fire and rescue and transport services, border security, and decommissioning of nuclear installations and management of radioactive waste and spent fuel.

Lynch and Labour have both questioned the effectiveness of any such policy, referring to the Transport Department’s impact assessment, which said minimum service levels could cause be more disruptive.

The ever-widening gap between the Unions and the government is set to grow as a top solicitor declares proposed “anti-strike” laws illegal, which if enacted could prove even more disruptive as unions find new ways to “strike.”