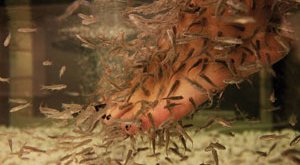 TICKLY: The sensation of dozens of tiny fish nibbling on ones feet has been described as ticklish.

FISH SPA owners reacted with anger at tabloid news that the treatment risks clients contracting Hepatitis and HIV. Garra Rufa fish are used in these spa treatments, which have gained worldwide popularity since 2006.

The report by the Health Protection Agency (HPA) sets out good practice for spas that offer the service, but did acknowledge that there is an “extremely low” risk that infections and bacteria could be transmitted if someone has a weakened immune system.

The risk of blood infected with HIV and hepatitis getting into an open wound on another person using the same tank would be minimised due to factors including the diluting action of the water, the report stated.

“Surely this is common knowledge and not a risk aimed solely at fish spa’s, but also water park’s, communal swimming pools, etc,” Seb Mason, of the Natural Fish Spa in Javea () told EWN.

As of spring 2011 there were 279 fish spa’s in operation in Britain, according to the HPA, although there are likely to be many more.

“Out of the thousands of fish therapy spa’s worldwide with millions of people using the treatment, there has not been one single reported case of any infection ever being passed through using fish therapy,” he said. 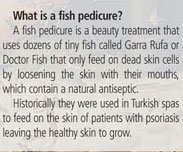 The Sun’s front page article “sensationalized” the report, “blowing it out of proportion,” said Mason. “Probably half the fish spa’s in the were put out of business overnight following this report.”

Meanwhile, Serran of Derma Fish in Fuengirola said “Like other spas, our tanks are cleaned daily, we use clean water and germicidal pumps that filter and clean the water to ensure perfect clarity, while strong UV light kills any bacteria.”

“Garra Rufa fish have been used to treat skin conditions in for more than a Century, with no adverse effects, only beneficial ones,” Serran added.

“Even the photo used to illustrate the article used the wrong fish. Instead of the toothless Garra Rufa fish, it shows a Chinese species called Chin-Chin, which have teeth when they are mature,” she said.

Consultant epidemiologist Dr Hilary Kirkbridge of the HPA said: “Provided that good standards of hygiene are followed by salons, members of the public are unlikely to get an infection from a fish spa, however, the risk will be higher for certain people.”

The NHS said: “While the report did acknowledge that the risk of infections could not be completely ruled out, it is important to view this in context and not be reeled in by fishy headlines.”

People who should not have fish pedicures include those: