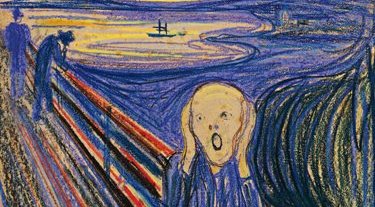 A group of at least eight bidders jumped into the competition, but it was a prolonged battle between two highly determined phone bidders that carried the final selling price to its historic level, after more than 12 minutes.

Simon Shaw, Senior Vice President and Head of Sotheby’s Impressionist & Modern Art department in New York, said: “If ever there was a work of art of true shock and awe it is Edvard Munch’s The Scream, which is not only one of the seminal images from art history, but also one of the visual keys to the modern consciousness.

We are delighted to say that this magnificent picture achieved a new world record at Sotheby’s for any work of art when it sold for $119.9 million €91 million) after an enthusiastic bidding battle involving at least eight bidders which lasted for more than 12 minutes.

Tonight’s sale total of $330,568,550 million marked Sotheby’s highest ever total for an Evening Sale of Impressionist and Modern Art, breaking Sotheby’s previous record of $286.2 million set in 1990 here at Sotheby’s in New York.”

The Scream is worth every penny that the collector paid for it. It is one of the great icons of art in the world, and whoever bought it should be congratulated.

Tonight was a historic night for Sotheby’s, and I am very happy to have been part of it.” David Norman, Co-Chairman of Sotheby’s Impressionist & Modern Art Department, added: “I have been at Sotheby’s for three decades, and the sale of 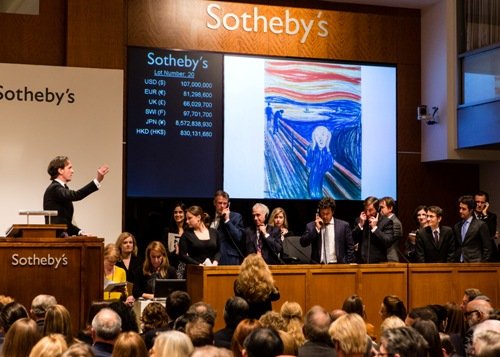 The Scream in tonight’s auction is the most exciting moment I have experienced here.

In 2004, Sotheby’s sold the first $100 million picture, and to shatter the world auction record again for such an iconic and rare work of art this evening was nothing less than historic.”

Mr. Norman continued: “We were also entrusted with so many other wonderful collections, including – and very happily – the Forstmann collection, which comfortably made a total within its estimated range, and we’re thrilled to have achieved the $29.2 million price for the Picasso and the $14.9 million sum for the marvellous Joan Miró surrealist work Tête Humaine.

Throughout the sale we established great prices in so many different categories: the Munch with Expressionism; Picasso with classic Modernism; Dalí with Surrealism; and Brancusi, a great work of sculpture.”

All but one of the 17 works from the estate of legendary financier Theodore J. Forstmann were sold in tonight’s auction, with the group totaling $83,012,000 – well within its $64.4/96.2 million estimate.

The selection of paintings, sculpture and works on paper were led by Pablo Picasso’s Dora Maar titled Femme assise dans un fauteuil, which achieved $29,202,500 and marked the second-highest price in the sale.

A superb offering of Surrealist works in the evening sale was led by Salvador Dalí’s Printemps nécrophilique from 1936, which has not appeared on the market in nearly 15 years.

A group of five gouaches by René Magritte from a private European collection totaled a strong $4,588,500, in excess of their cumulative high estimate of $3.8 million, while Max Ernst’s 1940 depiction of his lover and fellow Surrealist Leonora Carrington titled Leonora in the Morning Light outperformed expectations in selling for $7,992,500 above a high estimate of $5 million.

Strong prices for sculpture in the New York auction were led by a group of works from an important European collection, featuring rare examples by Constantin Brancusi and Auguste Rodin.