Following in the footsteps of the righteous pilgrims 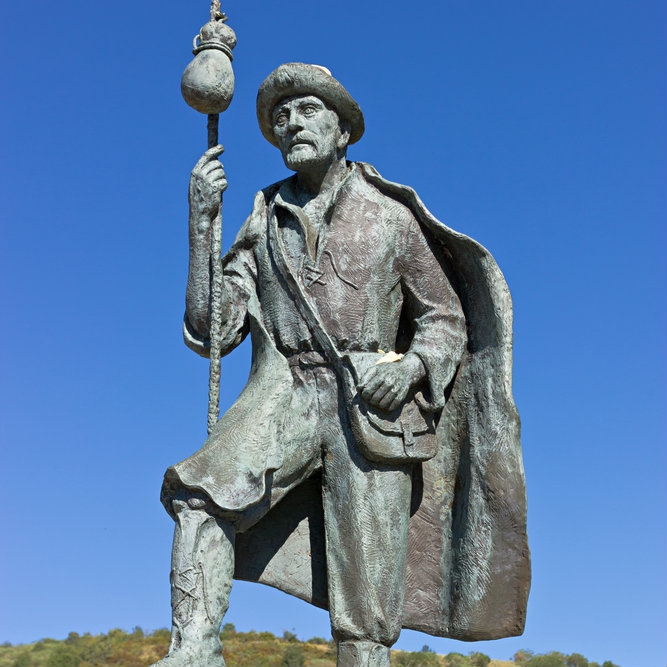 For a thousand years pilgrims have been treading the Camino de Santiago. Jack Gaioni followed the same path.

THE CAMINO de Santiago is one Spain’s great gifts to the world. This ancient footpath has, for over a thousand years, been a source of immeasurable significance for those who have sought physical and spiritual transformation.

Stretching 750 kms across northern Spain, this long distance pathway has achieved world- wide recognition as one of the most popular pilgrimage treks in the world.

Today’s pilgrims are not only spiritual soul seekers but also cultural and historical hounds, food and wine enthusiasts, those seeking a great physical challenge as well as lovers of natural landscapes and fresh-air.

The Camino takes about four to six weeks to complete on foot (two weeks by mountain bike) and is replete with medieval villages, ancient cathedrals and castles. The route can be divided into roughly three sections First from the French border at Roncesvalles to Burgos the Camino descends through the beech forests and green pastures of the Pyrenees foothills. Then it goes through Spain’s wine growing region of La Rioja and Navarra.

The final 250km section, from Leon to Compestela takes one through the lush green forests of Galicia. This article directs your attention to the middle 250km section, an area known as the Meseta.
It has long been described as Spain’s flat, treeless, interior table land. Some guide books, even reputable ones, have even gone so far as to describe it as “a soulless, featureless landscape”. My wife and I recently trekked the Meseta and our experiences and impressions were quite to the contrary.

During the past few decades, the Camino has experienced a remarkable renewal. The number of walkers has increased five fold during this time, but what is even more remarkable is that the modern numbers are believed to be less than half the estimated pilgrims that walked this route in the medieval period of the 13th-15th centuries.

To house that many people monasteries, churches and hostels were established to give hospitality to the pilgrims. Today more than 300 albergue hostels, many of which have been serving walkers for centuries, house weary pilgrims.
Many of these medieval buildings remain giving today’s pilgrim an on-going, real-time history lesson. For example, Castrojerez (50 kms from Burgos) was a major stopping point on the medieval Camino with no less than eight pilgrim hostels. A few of the original remain but the pueblo’s active past is still evident by the many ruins of castles and monasteries.

An intriguing ninth century castle overlooks the town and the Meseta countryside. Similarly, the pueblo Formista (two days walking to the west) is another example of a once thriving pilgrim town that is beginning to show sighs of a rebirth. The recently restored Iglesia de San Martin (consecrated in the early 11th century) is considered one of the finest examples of pure Romanesque architecture in Spain.

During Roman times the Meseta was a major breadbasket for the empire, with wheat grown on the better ground and barley and oats grown on the higher, poorer soil. So important was this growing region that the Romans spared no effort in an elaborate road infrastructure to bring these crops to the empire. These roads and bridges are still intact today even after 2,000 years of use.
The area near Hermanillos de la Calzadilla has been classified as the most perfect stretch of Roman road in Spain. What is remarkable about this section is that it goes through an area of bog- land devoid of any stone for road construction.

It is estimated that 100,000 tons of rock was needed for the substrate to raise the surface above winter flood levels. Every ton of material had to be transported in from elsewhere. It is said that Emperor Augustus himself traveled this road with a retinue of servants and troops.

The small Meseta pueblo of Astorga became a major city due to its prominent position at the junction of several major Roman roads. The Via Plata towards Seville and the Via Aquitana towards Bordeaux intersect in Astorga.
This convergence of routes gave rise to more than 20 pilgrim hostels, some of which are active today
Rome’s legacy in Spain was huge. For a tightly packed display of Roman road systems, bridges, aqueducts, temples and amphitheaters, the area around Astorga is in no short supply. Rich historical examples such as these abound on the Meseta section making it anything but soulless.

Contrary to the aforementioned guidebooks and noticeable especially when traveling on foot, is that the Meseta is not flat.
The pueblos, although few and far between, are set low in the long valleys bisected by oak and poplar-lined rivers. (Note; these trees were absolutely ablaze in red, yellow and orange colours during our late- autumn trek!). The rivers, valleys, open wheat fields, the big skies and distant horizons of the Meseta, along with views of the snow-capped Cantabrian peaks to the north, can hardly be called “featureless”.

Granted, the Meseta section of the Camino can seem lonely and solitary. At times the distances between pueblos can make for long days. But given the rich history that awaits those willing to investigate and the stark beauty of the landscape, the effort is well worth it. To say however that this area is “soulless and featureless”…not so much.