Pellegrini: “Our mentality is that we could win or lose the match with every ball we play” 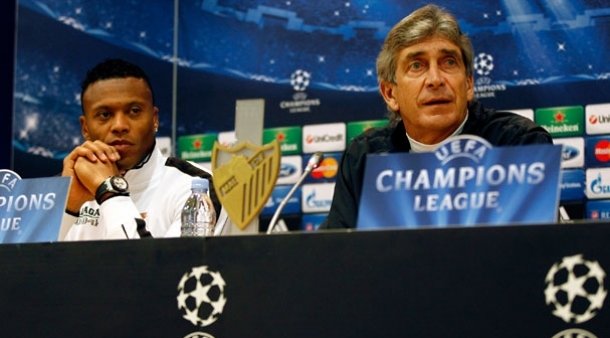 The Málaga CF coach analyses the game: “It’s a 180-minute match, 90 minutes of which we’ve already played.  We’re currently at a disadvantage and have got another 90 minutes to turn the match around, taking into account the additional value of away goals.”

In order to reverse the scoreboard, it’s imperative Málaga don’t concede any goals: “Our priority is not to concede any goals, as this would mean us having to score three times in order to win.  Our mentality is that we could win or lose the match with every ball we play.”

Pellegrini believes FC Porto won’t focus on defending their 1-0 advantage: “I don’t think FC Porto will change their style of play.  They always have certain characteristics on the pitch, and I’m sure they won’t be concentrating on defence, but will be determined to score to increase their advantage.  The most important thing we can do is maintain our confidence and determination to win.”

La Rosaleda will turn into a pressure cooker tomorrow night, but Pellegrini doesn’t want the team to be affected by nerves: “It’s important that we keep our nerves and anxiety under control, as if we’re too nervous we’ll make mistakes.  An early goal would be ideal, but we’ve got 90 minutes to score.  We’re focusing on playing a clever match and ensuring we have a positive result at the end of the 90 minutes.”

Julio Baptista: “We’ll make the difference with our attitude, game play and intensity”

The Brazilian-born striker assesses tomorrow’s match and believes the Blue and Whites will turn the negative result around: “I think we’re more than capable of gaining the advantage on the score board here at our home ground.  We need to score a goal, but the important thing is being confident that it is possible.  It’ll be tough, but we’re going to make things as hard as we can for FC Porto.”

The striker rejoined group training this week, following his recovery from a grade 1 injury to his left biceps femoris muscle: “I’m feeling fine, I trained all week, I just think it was a muscle overload injury I sustained through fatigue.  If the coach thinks I should play tomorrow, then I’m definitely match-fit.”

In order to win tomorrow, Baptista appeals to the team: “They’re going to focus on imposing their style of football.  We are the ones who can turn it around to our advantage.  We’ll make the difference with our attitude, game play and intensity.  These factors will turn the result around from the first leg.”  The Brazilian-born forward adds: “We’re not thinking about the previous match, it’s in the past and there’s nothing we can do about it now.  One of the best things about football is that circumstances can change in every game, and tomorrow’s clash will be very different from the last.”

The atmosphere throughout the city has spread to the locker room: “This is an historic match for Málaga CF.  We’re absolutely determined and full of positivity and motivation, as are the fans, ahead of tomorrow night’s game.  The Blue and Whites’ fans will really enjoy the match and we’ll be doing everything in our power to ensure we get the result we’re all hoping for.”

Julio Baptista is one of the stars of Málaga CF’s video promoting this match.  The striker states: “This video allows us to connect with our fans, we want all our followers and supporters to be as psyched up for this match as us!”