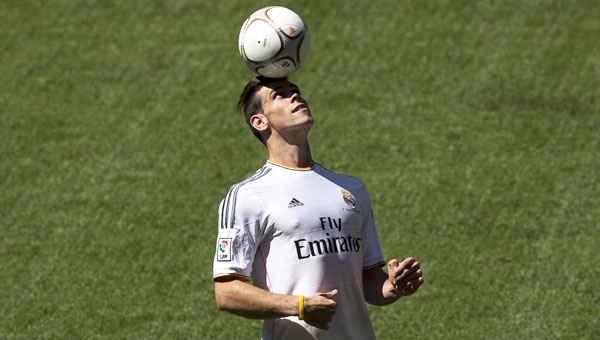 BARCELONA, Spain (AP) — Gareth Bale is set to make his debut for Real Madrid following his world-record transfer when the Spanish club visits Villarreal on Saturday just before starting its campaign for an elusive 10th European Cup.

The match at El Madrigal Stadium comes three days before Madrid travels to Turkey to play Galatasaray in its Champions League opener.

Bale practiced for the first time with Madrid on Wednesday, the day after making his first official appearance this season as a substitute for Wales in a 3-0 loss to Serbia.

Madrid said star forward Cristiano Ronaldo was the first to greet Bale on his arrival to the club’s training facilities.

Bale will likely still need time to get fully fit after not playing during the drawn-out negotiations with Tottenham that ended in Madrid breaking its own transfer record for Ronaldo with a €100 million ($132 million) payout for the Welsh winger.

Madrid has won its first three games of the Spanish league season, but it faces a Villarreal which has also made a perfect start in its return to the topflight after one season in the second division.

“This is a chance to show that we can compete with anyone and fight with a team like Madrid,” said Villarreal team captain Bruno Soriano.

“Last season we dreamed of playing against teams like this. Now our chance has arrived and we want to play a great match.”

Madrid coach Carlo Ancelotti will still be without injured midfielder Xabi Alonso and will now also be missing defender Marcelo after he picked up an injury with Brazil.

Barcelona, Atletico Madrid and Real Sociedad also play on Saturday to warm up for their Champions League group phase openers.

Barcelona hosts a Sevilla side looking for its first win of the season.

Lionel Messi has scored a league-leading five goals in two appearances to have the Catalan club in first place on goal difference. He also scored two more goals for Argentina this past week.

Barcelona hosts Ajax on Wednesday in the Champions League.

Camp Nou “is one of the toughest grounds to visit in the league, but we are going there with hope that we take away a positive result,” said Sevilla midfielder Jairo Samperio. “We can’t try to fight them for possession of the ball. We have to be well positioned in defense and look to hit on the break, that’s their weak spot.”

Atletico hosts a frisky Almeria side looking for its fourth win in as many rounds. It then welcomes Zenit St. Petersburg in its return to the Champions League on Wednesday.

On Sunday, it’s: Granada vs. Espanyol, Getafe vs. Osasuna, Malaga vs. Rayo Vallecano, and Real Betis vs. Valencia.