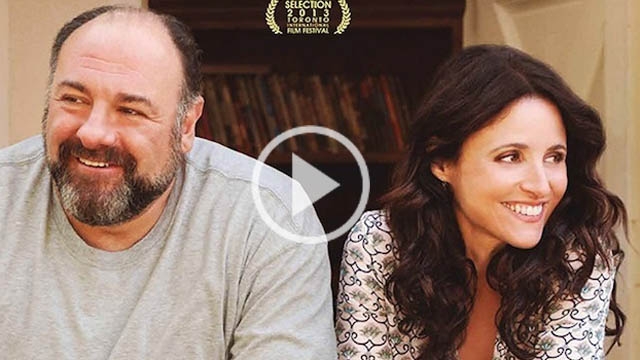 Beholding the late James Gandolfini doing a lovely job in a change-of-pace role significantly intensifies the already funny/sad aspects of “Enough Said,” an engaging comic romance set amid the minefields that imperil starting up mid-life relationships. The title notwithstanding, writer-director Nicole Holofcener’s look at a 50-ish divorced mother with a daughter about to leave home is never at a loss for words, many of them quite amusing, making the film a leading contender for best girls’ night movie of the season. For their part, men will enjoy watching Gandolfini in a relaxed, self-effacing, regular guy performance.

Employing to her advantage a more traditional story structure than is her norm, Holofcener builds her snappy social comedy around a key piece of information that her heroine doesn’t know, that the guy she’s beginning to date is the much-disparaged ex of her new best friend. This sort of trick has provided the trigger for rich farcical doings going back at least as far as Shakespeare, and Holofcener uses it as a springboard to look at a raft of self-absorbed, often myopic LA Westside types who have it together in some ways but not in others.

Almost everyone here is divorced with an ex living nearby and one kid who’s about to fly the coop for college. Eva (Julia Louis-Dreyfus) is a massage therapist who lugs her portable table to her clients’ homes and is preparing emotionally for the looming moment when her smart daughter Ellen (Tracey Fairway) heads East for school. A crowded cocktail party provides a convenient way to start stirring the pot, as well as for the writer to show her knack for lively, acerbic banter, much of it coming from Eva, who early on decides that there’s no one there she finds attractive. The man she’s just met, Albert (Gandolfini), agrees.

With her uncensored emotional expressiveness and ready humor, Eva is an instantly accessible protagonist, always ready to confide and/or make a joke about a situation or herself. No intellectual, she nonetheless strikes up a quick friendship with an odd bird, Marianne (Holofcener regular Catherine Keener), a divorced poet whose refined lifestyle Eva admires and who speaks very openly about the many shortcomings of her unnamed former husband.

The castoff, of course, is Albert, who, on a dinner date with Eva, proves to be spirited company. He is, admittedly, quite heavy (“I’m planning on losing some weight. I really need to,” says Gandolfini’s character, who has to work at not being a slob. But he’s got a daughter (Eve Hewson) heading for college as well, he and Eva laugh easily together and there are no awkward silences. Promising.

While massaging Marianne, Eva hears more and more horror stories about her ex, just as Eva is enthusing to her girl pals, such as Sarah (Toni Collette), about her freshly revived intimate life. At the same time, she gets into trouble by encouraging one of her daughter’s friends (Tavi Gevinson) to go ahead and lose her virginity and otherwise doesn’t always use the best judgment.

This is Holofcener’s sweet spot, the depiction of the emotional confusions, self-deceptions, uncertainties and misguided decisions that can cloud and get the better of otherwise bright, aware people, especially the female characters she tends to specialize in. When a chance revelation announces to all concerned that Marianne’s ex and Eva’s new boyfriend are one in the same, the fallout is immediate and widely felt. The aftermath provides just the right amount of time for both the characters and the audience to assess how the damage can be repaired.

In what turns out to be his second-to-last film (“Animal Rescue” will be released next year), Gandolfini is quite wonderful playing a mensch with plenty of faults but an honest, relaxed, slyly funny guy who’s reassuring to be around.