Spain thinking ahead before final qualifiers 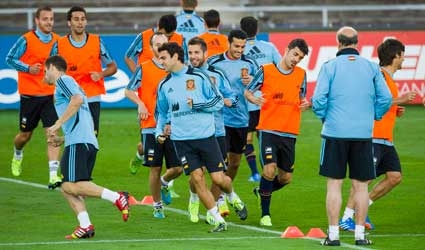 MADRID (Reuters) – With holders Spain poised to secure their berth at next year’s World Cup finals, thoughts are already turning to what might happen after the tournament when coach Vicente del Bosque’s contract is due to expire.

An avuncular character known for his ability to foster harmony in his hugely talented squad, Del Bosque will be 63 by then and whatever happens in Brazil next year he has already earned his place in the pantheon of soccer’s greatest managers.

After taking over from Luis Aragones following Spain’s Euro 2008 victory, he led the Iberian nation to their first World Cup triumph in South Africa in 2010 and a second straight continental title in Poland and Ukraine two years later.

As Spain prepare for their qualifiers against Belarus in Palma de Mallorca on Friday and Georgia in Albacete four days later, Del Bosque’s record is an outstanding 65 wins from 80 matches, with eight draws and seven defeats, only three of which were in competitive games.

One indication of Spain’s success under the former Real Madrid coach is that the three goals Brazil put past them in their 3-0 victory in June’s Confederations Cup final was the same number they conceded in all 13 of their games at the 2010 World Cup and Euro 2012.

Although Del Bosque, who won two Champions League crowns with Real, has hinted he will step down after the World Cup, the Spanish football federation (RFEF) will try to persuade him to stay on for two more years until after Euro 2016, As newspaper reported on Wednesday.

The idea is he will oversee the transition to a new generation of players as the likes of Xavi, Iker Casillas, Fernando Torres and David Villa wind down their glittering international careers, the paper said.

“We have not considered any alternative for the post of national team coach,” As quoted RFEF general secretary Jorge Perez as saying.

“Del Bosque will continue with us for as long as he wants and for as many years as he wants,” he added.

Victory against last-placed Belarus on Friday would mean unbeaten Spain need a point against Georgia on Tuesday to be certain of top spot in qualification Group I ahead of France.

The French, who snatched a 1-1 draw in Madrid in October last year before losing to their southern neighbours 1-0 in Paris in March, play their final game against third-placed Finland at the Stade de France on October 15.