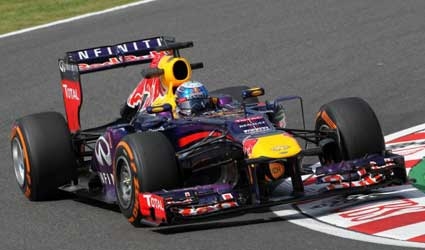 Vettel, who can clinch his fourth successive world title at the age of 26 on Sunday if he wins and Ferrari’s Fernando Alonso finishes lower than eighth, had problems with his car’s kinetic energy recovery system (KERS) and had to settle for second.

The German, out-qualified by Webber for the first time this season, will still be favourite to win given the championship situation, and the likelihood of team orders.

Alonso, 77 points behind Vettel with five races remaining, qualified only eighth on a sunny afternoon at the Honda-owned figure-of-eight Suzuka circuit.

“It was pretty good. Sebastian had a problem in qualifying so it’s a little bit of a hollow pole position if you like,” said Webber of his first pole position since South Korea in October last year.

“I’m happy to be on pole and you’ve got to grab that opportunity when you can. We did the laps when they counted, and it’s a very nice farewell for me on my final time here at Suzuka and on a phenomenal circuit,” added the Australian, who is leaving Formula One at the end of the season.

“It was a real highlight for me. I think in general we’ve got a good car for the race.”

Lewis Hamilton, for Mercedes, and Romain Grosjean in a Lotus, share the second row while Ferrari’s Brazilian Felipe Massa starts fifth at a circuit where he was runner-up last year.

Webber’s 12th career pole also ended a run of three poles in three races for Vettel, who has won at Suzuka three times in the last four years.

Saturday might be as good as it gets for the Australian but he was not about to roll over without a fight.

“He’ll do his race tomorrow and I’ll do my race,” said Webber. “It’s not like it’s the last race of the championship… he can’t qualify on pole in every race.

“Let’s see how it’s looking at the end of the race… but in general we’ll be there for ourselves tomorrow.”

Vettel was fastest on Friday but struggled with KERS problems on Saturday morning, when he sat out the end of final practice while the team changed the battery.

The problem then returned for the final phase of qualifying, even if the KERS was re-set and working on his second run.

“I think we have a little bit more time after qualifying now to have a look and see whether there is something else broken or damaged,” said the German, who refused to use the problems as an excuse. “We tried everything, it worked sometimes.”

Alonso hoped to be able to make up places on Sunday, as he has done all season, but had no illusions about the championship.

He told reporters the main focus would be on scoring more points than Mercedes, who are only a point behind second placed Ferrari in the constructors’ standings.

“If Sebastian doesn’t win the championship here, he’ll win in India or in Abu Dhabi,” the Spaniard told reporters. “We will not race to try to finish in the first eight to keep alive the championship.

“We will race to try to score as many points as possible to try and finish in front of the Mercedes. That is a very important goal for us. If we can keep the championship open to India it will be OK but it will not change too much for us.”

Qualifying was halted in the first phase for five minutes when Jean-Eric Vergne pulled over at the exit to the hairpin with his Toro Rosso’s brakes on fire, with a cloud of smoke billowing up as marshals put out the flames.

Germany’s Adrian Sutil, who crashed in final practice and picked up a five place grid penalty for a gearbox change, failed to progress beyond the first stage.