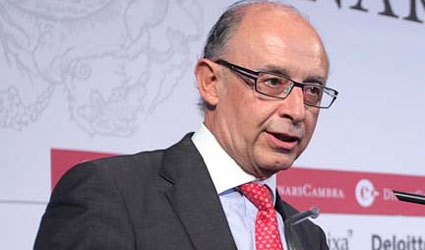 Trouble has brewed for some time with 29 resignations and sackings since last June when Tax Administration Agency (AEAT) chief Beatriz Viana was sacked.

Blunders over the Infanta Cristina’s tax history and allowing ex-PP treasurer Luis Barcenas to legalise ill-gotten gains through the government’s fiscal amnesty were too calamitous to overlook.  Heads would roll anywhere for less. Matters worsened a few weeks ago when a “big payers” inspector was sacked after rejecting an appeal by multinational cement company Cemex against a €450 million fine.  Her superiors “wanted to study it more closely,” sources revealed.

Hacienda comes under the Finance Ministry, whose head, Cristobal Montoro, blithely shrugged off the unrest.  Most in AEAT’s upper reaches were socialists anyway, he remarked.

So that makes it all right, does it Sr Montoro?  All’s fair in love and war and politics too if they aren’t your own.

It all adds up

SPAIN’s president Mariano Rajoy is comfortable making speeches but not giving interviews. Especially when he knows that corruption claims will crop up.

So he had to bite the bullet after agreeing to a marathon interview with journalists from the New Europe editorial project that includes El Pais and the Guardian.

Inevitably he had to answer questions about Spain’s endemic political and financial corruption.  “In my party there is no double accounting,” Rajoy declared in a triumph of blind faith over evidence.

But as far as the president is concerned, this could well be true.  It’s not uncommon for a general not to know what his sergeants get up to.

Who will be Madrid’s next mayor?

Municipal elections aren’t so far off (only May 2015) and the PP will have to choose a candidate. Incumbent Ana Botella – wife of ex-president Jose Maria Aznar – has seen her popularity ratings plummet but would like to repeat.  She is no Rajoy fan and many in the PP hierarchy would allegedly like to see her gone.

How about Esperanza Aguirre?  She was an extremely popular regional president, but like Botella is not ‘new’ PP and repeatedly reveals that she is underwhelmed by Mariano Rajoy.

This could be a toe-in-the-door moment for the PSOE, but they’ve a dud lot to choose from too.

Shape of things to come

THE Spanish government received two warnings from Brussels.  One was for the razor wire currently cutting illegal immigrants to shreds at the Melilla border. Another for Interior Minister Jorge Fernandez Diaz’s law that erodes civil rights.

Rajoy rightly pointed out in the New Europe interview that Spain has no eurosceptic party. True enough. Possibly because when not fussing over the shape of bananas, Brussels occasionally spares a thought for the shape of society.