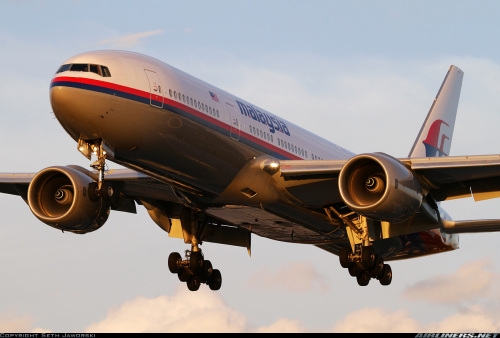 UPDATED: It has now been confirmed that Malaysia Airlines flight MH370 did crash into the Indian Ocean, off the Australian coast.

Satellite data has confirmed that the last recorded position of the plane was over the Indian Ocean, west of Perth.

Najib Razak, the Malaysian Prime Minister, made the announcement in a news conference confirming that all 239 people on board the flight were lost when the plane crashed just off the Australian coast.

Mr Razak said: “This is a remote location, far from any possible landing sites.

“It is therefore with deep sadness and regret that according to this new data, flight MH370 ended in the southern Indian Ocean.”

Malaysia Airlines Flight MH370 disappeared from radar screens an hour after taking off from Kuala Lumpur on March 8.

There has been no confirmed sighting of the plane since but debris has been found in remote waters off Australia which could be from Flight MH370.

Malaysia Airlines have reportedly told relatives they should “assume beyond any reasonable doubt” that all those on the plane have been lost and that none of those on board survived.


There are reports of debris some 1550 miles west of Perth and the Australian Maritime Safety Authority said the entire crew of HMAS Success is looking for any objects that could be from the plane.

This morning the search had to be suspended due to dangerous weather conditions.

Malaysian authorities have said that they are focused on narrowing the search area.

The company is under pressure over its handling of the search for the missing plane.

They were criticised for sending text messages to relatives of Flight MH370 passengers, with the message reading that families should accept that it is unlikely any survivors will be found.

Chief executive Ahmad Jauhari Yahya has said he will decide later whether to resign, describing it as a “personal decision” to be made later.

The US Navy is reportedly sending experts and black-box detectors to help in the search.