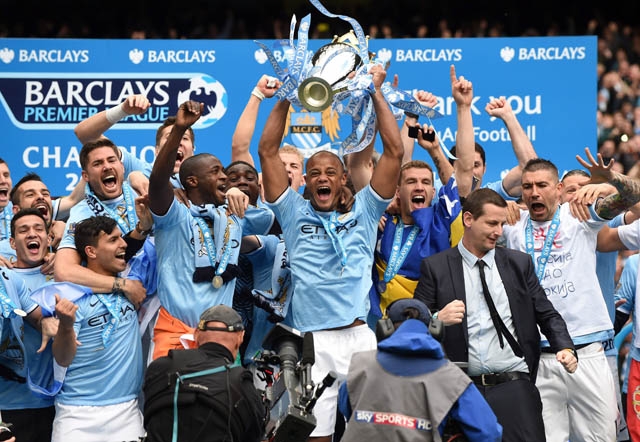 Manchester City have taken the Barclays Premier League title with a 2-0 win against West Ham United at the Etihad Stadium.

Goals on either side of half-time from Samir Nasri and Vincent Kompany saw City claim the title with a relatively easy victory and a game with uncharacteristic lack of suspense.

Ahead of the match Manuel Pellegrini’s side led second-place Liverpool by only two points.

But even a draw against West Ham would have been enough to take their second title in three seasons.

And City’s only title rivals Liverpool were behind for much of the afternoon before finally beating Newcastle 2-1.

City received a boost for their final match with the return of striker Sergio Aguero from an injury.

The Argentine’s return was the only change from the City side that beat Aston Villa 4-0 mid-week.

However, it was Nasri who broke through West Ham’s defences six minutes before the half-time interval, taking aim from 20 yards with a powerful shot which easily found its target.

The first goal of the game was followed by a second just four minutes into the second half when Kompany took a winning shot from six yards, assuring that his team would be triumphant.

City was playing with a group of players who cost more than any other in English football history. So critics will be arguing that if they couldn’t win now, after a £102 million spend last summer alone, then they never could.

However, expensive players aren’t always a guarantee of victory – as Pellegrini’s predecessor found out.

City have worked hard to play at the level they’re at now, being consistently good and even outscoring rivals with 102 goals this season.

Following the slick, professional and assured win the team were paraded through the streets of Manchester to mark their victory.

City have recently hit the headlines for all the wrong reasons – with especial focus being on their UEFA punishment for breaching the European governing body’s Financial Fair Play regulations as well as the fact that the multi-national nature of the team is under scrutiny.

But this win, at the end of a season where the lead changed 25 times, was definitely deserved and City have proved that they have great players, a great manager, and, clearly, what it takes to get to the top.

And City’s Chilean manager, Pellegrini, is determined to stay there. Following the team’s success he said:

“Big teams cannot be satisfied with one title. On Tuesday we start working for the next season.”