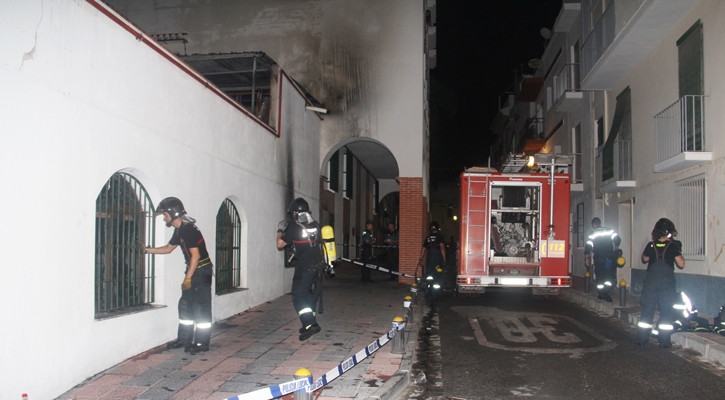 AN Almuñecar hotel had to be evacuated due to a massive fire that broke out on Friday.

The flames scorched a hotel hall and caused extensive damages but fortunately no human lives were lost. The alert was raised at 4.15am on Friday when a call was made to the 112 emergency service saying a roaring fire had started at the Hotel Carmen on Avenida Europa next to Parque El Majuelo in Almuñecar.

Three firefighters arrived on the scene to extinguish the flames, but they had to call for reinforcements given the massive scale of the blaze. The Local Police and the Guardia Civil in Almuñecar were also deployed to the hotel.

The firefighters ordered hotel guests to evacuate the premises to avoid the loss of human lives and battled the flames for nearly two hours. “We realised the fire was actually concentrated in a 300-square metre hall, so we put it out through the windows. It took us 40 minutes to bring it under control but almost two hours to extinguish it,” said a local firefighter talking to the media.

The hotel guests were only allowed to go back to their rooms after the fire had been put out, though some of them had to be attended to by paramedics for smoke inhalation. “Fortunately nobody was hurt and it was just a big scare,” said hotel spokesman Manolo Campos. The smoke spread to the hallways and the hotel will now have to determine how much it will cost to repair the damages caused by the flames, said Campos.

Though the exact cause of the fire is yet to be determined, the hotel is not ruling out any hypotheses, including possible wrongdoings. “It is surprising that the fire would break out on the first floor, it started in an area where there is nothing that could create a spark. One may think it was arson, but it is too soon and we have to wait,” said Campos.

The Guardia Civil and municipal technicians are to look into the fire and evaluate its causes.