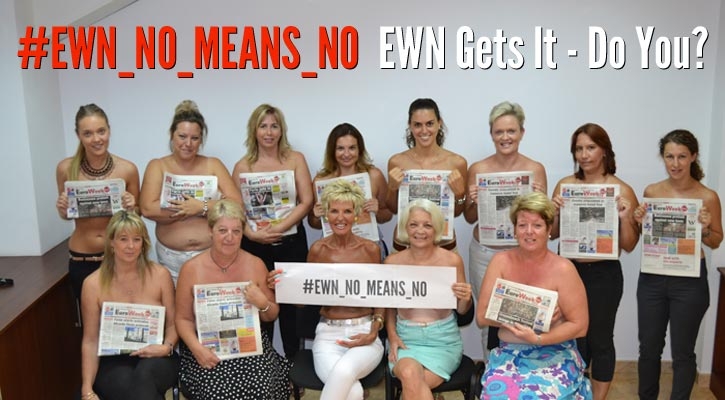 NO MEANS NO, a phrase we may have been used to hearing as youngsters growing up when being disciplined by our family and loved ones. No to extra sweets and cakes, no to staying out late at night with friends, no to watching too much television and being told when chancing our luck: “I told you, No means No.”

A phrase which is not new to us, it just isn’t used as often as when we were children.

No means No is back in daily conversation, this time helping to promote equality for women and educate some men who may need it, to deliver a simple message that No really does mean No.

A woman dresses up to go out for an evening with friends, spending time to pamper herself, fix her hair, make-up, selecting the clothing to fit the occasion, taking care to choose a perfume of preference, feeling good and looking good. The attire may be revealing, maybe sexy, maybe suggestive, but should that matter?

Deputy Prime Minister of Turkey Bulent Arinc declared his thoughts on women in Turkey on August 1, showing no fairness or equality. Arinc’s controversial speech has been seen by many as a clear blow against women’s rights in Turkey. In it he said: “Women spend too much time on telephones discussing minor things such as recipes and should in future reserve these conversations for when they (women) meet face-to-face.”
And as if that was not enough, he added: “Where are our girls, who slightly blush, lower their heads and turn their eyes away when we look at their face, becoming the symbol of chastity?” Arinic’s speech highlighting bigotry and anti-feminine views has resulted in an overwhelming response from women in Turkey, especially those in high-profile positions.

Further controversy over the Spanish political establishment’s outdated views on women and sexual assault has arisen after comments made by a mayor to a radio station that seemed to denigrate women’s accusations of rape. Francisco Javier León de la Riva, the Partido Popular (PP), mayor of Valladolid in Central Spain, said he would think twice about getting into a lift alone with a woman for fear of false cries of rape. He went on to say: “Sometimes it’s the other way around. Imagine you are in a lift with a girl who is out to get you. She rips off her bra or skirt and runs out screaming that you tried to assault her.”

The mayor has since apologised and retracted his words, explaining that what he said had been taken out of context. Whilst current legislation is due for review and change by the Interior Ministry,  Carmen Monton, the opposition PSOE Party’s Secretary for Equality, has said that the continued gaffes show how old-fashioned and inherently sexist the government’s attitude towards women and sexual assault remains.

The words and actions of these two leaders alone have generated a response globally and locally. The inference is that women are not equal to men. The in-depth detail of their respective speeches suggesting that women are provocative in their attire, and their attitude generally are grossly undermining the women of today.

To make a suggestion that a woman’s dress sense or travelling in a lift alone with a female may lead to allegations of sexual crimes is unacceptable. There have even been comments that women should be educated so as to ‘improve their behaviour’, so as to prevent sexual assaults and rape.

Euro Weekly News raises concerns over the misogynous views of elected officials whose opinions belong in the Stone Age.

At the Euro Weekly News group, we are concerned that the outdated views of men in high places, just like Mayor De la Riva, are contributing to the continued belittlement of women’s rights to be women.

Equality in the workplace, equality at home, and equality in public places.

Instead of telling our daughters what not to wear, why don’t we start to educate our sons on how to show the respect due to their female peers?

Equality means equality: and No means No!

EWN would love to hear the views of our readers on this controversial matter, and reach out to women to join in with the #EWN_No_Means_No campaign. Send your photographs to EWN with your details and help raise awareness and stamp out latent sexist attitudes.

Send your photos and join in the campaign to [email protected] and keep an eye on our website www.euroweeklynews.com/no-means-no