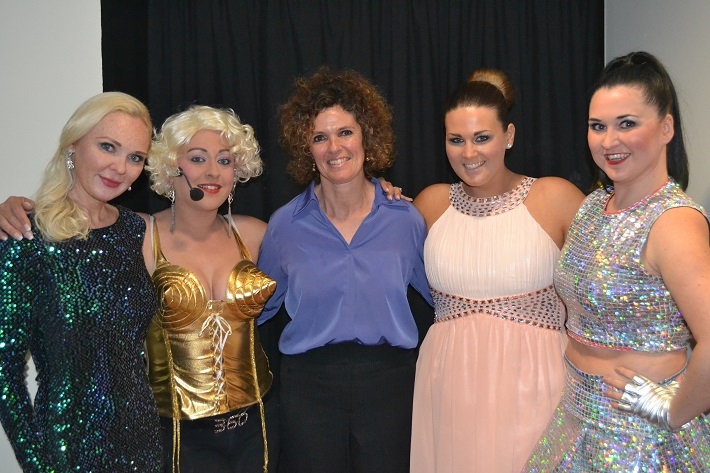 A NIGHT of the Divas featuring some of the Costa del Sol’s top lady tribute acts was a resounding success.

Cheered on by a large and enthusiastic crowd in the Moonlight at Sunset Beach bar the four acts – Laura Elen as Katherine Jenkins, Jordana as Madonna, Nikki Rae as Adele and Laura Oldfield as Katy Perry – gave their all in a highly professional charity production.

They gave up their Saturday night (February 21), potentially a top pay day, to help raise funds for mental health charities to back up their friend Sam Bayley’s campaign to collect cash for the causes.

And it was all worthwhile as €2,770 was raised on the night through ticket sales and a raffle. That money will go to the UK’s Mental Health Foundation (MHF) and Benalmadena charity AFESOL.

To add to the excitement the show was videoed for UK based digital TV company a1r.tv and will be broadcast via the internet.

Sam said: “It is wonderful what the girls have done. We were very nearly a sell out, and it has been a brilliant night. They and Dianne Sutton, everyone who helped, and the Sunset Beach have my thanks.”

The night kicked off with Nikki’s beautifully sung tribute to Adele followed by Laura wowing the crowd with her superb Katherine Jenkins homage. Next up was the screening of a video about mental health awareness made by Sam’s daughter Hannah.

The second half of the show wratcheted up the fun with Laura Oldfield and Jordana’s high energy tributes to Katy Perry and Madonna, backed up by talented dancers, leaving the audience wanting more.

The evening was rounded off with surprise ‘guests’ the Spice Girls making an appearance! Or at least a tribute to them.

Sam will be running the London Marathon later this year in aid of the MHF and in memory of ‘Leila’, who died from mental illness in January last year.

You can sponsor Sam’s marathon run by visiting http://uk.virginmoneygiving.com/SamanthaBayley