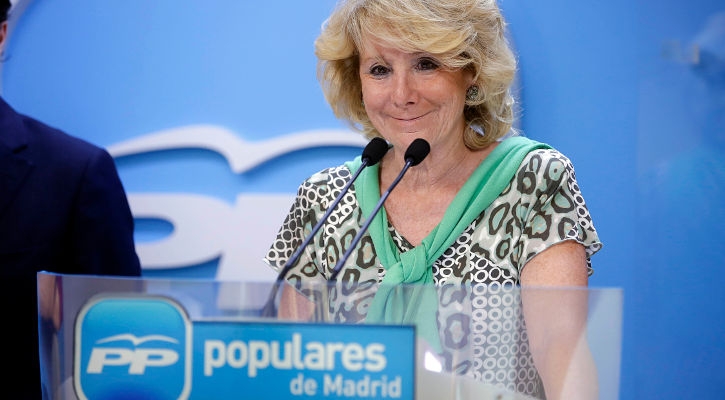 ESPERANZA AGUIRRE will, as she hoped, run as Madrid mayor.
A former minister with Aznar and ex-president of the Madrid autonomous region Aguirre is as abhorred as she is adored and victory is no longer assured in a four-horse PP, PSOE, Podemos and Ciudadanos race.

Rajoy can never forget that Aguirre tried to topple him in 2008 after he lost the general elections for the second time running.  If she makes it to city hall he can at least heed the old warning attributed to both Machiavelli and Michael Corleone: “Keep your friends close and your enemies closer.”

THE Partido Popular is in a cleft stick over Ciudadanos.

The government knows that it owed its vast 2011 overall majority to voters who were not natural PP voters. To prevent their desertion in this year’s elections, Rajoy has constantly condemned Podemos for its radical domestic and international policies, citing his own party as a safe haven for the Centre.

Then along came a genuine Centre party, Ciudadanos, which is attracting the many non-PP voters who put Rajoy in power. Now the PP is flailing around for a valid argument to undercut this potential vote-stealer.

Rajoy’s big problem is not keeping the hardcore Right electorate happy but wooing the uncommitted. He did it in 2011 but he won’t do it twice: not with Ciudadanos and Podemos around.

WHATEVER boils and seethes behind the Partido Popular scenes the party strives to present an image of calm.

She has shrugged off critics’ accusations that she is “very conservative” by citing the PP’s candidate for the presidency of the Madrid autonomous region, Cristina Cifuentes.

Not the best of arguments, Espe. A background in the neo-fascist Movimiento did not stop Adolfo Suarez from transforming into Spain’s first – and still best-loved – president during the Transition to democracy.

The instructing judge on the high-profile Gurtel and Barcenas corruption cases was offered the option of remaining to tie up loose ends on other investigations involving Cataluña’s ex- president Jordi Pujol and Barcelona football club’s former president, Sandro Rosell.

Ruz preferred not to, sources said, and his successor Jose de la Mata can take them over. Wise man: de la Mata will take the flak, too.