Bloodhound breaking barriers in the desert 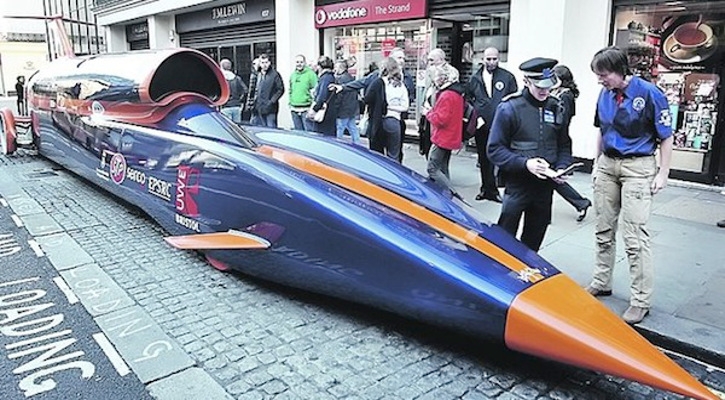 A BRITISH car hopes to break the land speed record by shooting through the desert at over 1,000mph, and its body has to be made bulletproof to withstand the huge impacts it will undergo as it rockets into the record books.

The Bloodhound SSC car, took a tour of London’s streets this week, but won’t be getting any speeding tickets. The car which has been assembled just outside Bristol, is counting down to its final test, but first it must ensure that the car can withstand its journey.

As it hurtles through the desert, it will be going at such speeds that even a small pebble could cause huge damage.

If a bag of sugar hit the centre of the wheel while the car was travelling at full speed, for instance, it would be the equivalent of 50 tonnes of blast, the weight of a fully loaded lorry. To ensure that it can withstand such hits, the team behind the project has fired projectiles at the panels on the car. By ensuring the panels are essentially bullet-proof, they can make sure they are pebble-proof too.

The panels will protect the car’s driver, Andy Green, as he drives the car through the desert. The project has been seven years in the making and has been a dream of former RAF pilot Andy Green since he set the current record in 1997.

The supersonic car will use one Nammo hybrid rocket in high speed testing scheduled for 2015 and a cluster of three rockets in its 1,000mph (1,609 km/h) campaign in 2016. This is in addition to the main engine, which is normally found powering a Euro-fighter Typhoon, weighs a tonne and produces 20,000lbs (90kN) – or nine tonnes of thrust. The two power plants together produce 135,000 thrust horse power, or the equivalent to 180 Formula 1 cars.

The team behind the car hope that it will be able to beat the 763mph record, which was set by Thrust SSC in 1997.

When it did so, it became the first car to break the sound barrier.