An alien arrives on the beach of Mojacar and it’s out of season! 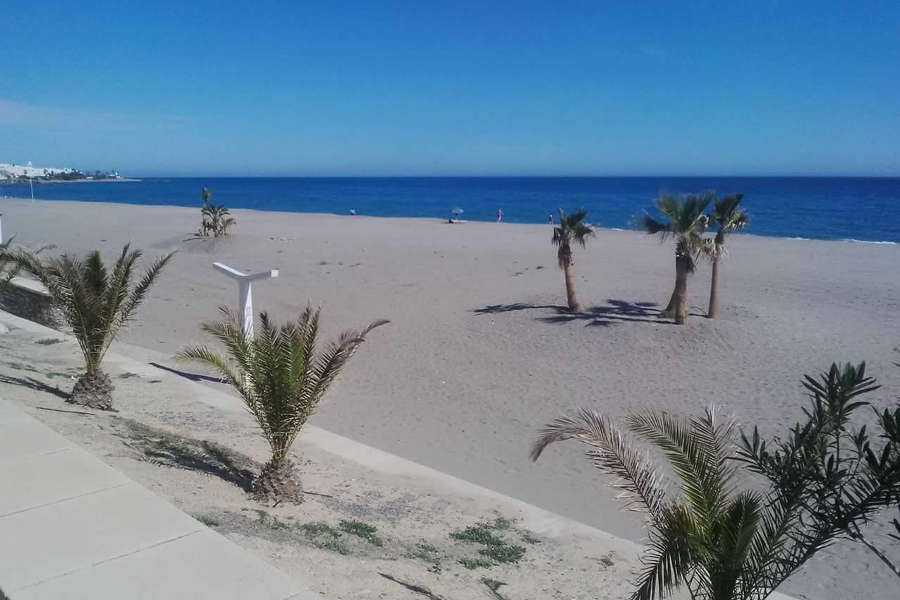 MOJACAR BEACH: The summer tourist season was as consistent as the rising sun.

THE door flew open and we all immediately turned our heads. There stood Paco, barely able to catch his breath and talk at the same time. “It’s the truth. It’s there just like Juan said it was.” I was perplexed, “an Alien? ”

“No,” snarled Paco. “The tourist.” We all gulped our drinks as we stared around the room perplexed and confused. Such an event had never occurred in the beach history of Mojacar – EVER. The year was 1975 and during my six years in Mojacar the summer tourist season had been as consistent as the rising sun. A few new comers from France trickled in during July but the 1st of August the Madrileños arrived en masse.

Their gleeful and noisy appearance signified snarled traffic, dangerous driving, followed by curses to the locals for driving like donkeys and many impertinent disgruntled hand waving gestures. All the restaurants did a roaring trade and were ‘a salmon run’ that everyone needed to survive until the next invasion at Easter time.

“Well, how’d he get there? Must have been some sort of bad ass they left behind. Wouldn’t take him back with them! What’s he look like?” Paco was for a nano second the most informed and important personage on the beach and relished his speaking chance as thus. “Well, he’s gotta a towel lying right there on the sand, a cooler for beer and a book.

Some of those magnifying glasses so he can look at other people, but there isn’t anyone else to see. The news was indeed so earth shocking Antonio wanted to drive up to the village and warn everyone that somehow a tourist had been left behind and we all should fear the consequences.

The locals put up with the inconvenience and menace as long as tourists spent. Then the sands that none of us that lived here rarely used, became ours once more and the seagulls.

All ancient rules for living were smacked in the mouth that early day in September. It was a definite abuse of the century old and accepted seasonal mutual sharing. Would it end in some sort of war? I envisioned the death of the burros, who were as familiar to us as flies. I wondered if I would have to learn to become busy again.

Buy a watch? Finally learn to be in a hurry to go somewhere, then rush to get back. Was that creature lying on the beach basking in the sun the warning of future things to come – changing a tranquil life and teaching us to start dancing to a different quicker beat from a modern drum.

Again the bar door flew open, it was Antonio, coming back for his keys. He was still shaking his head. “This could be the death of us all,” he announced.