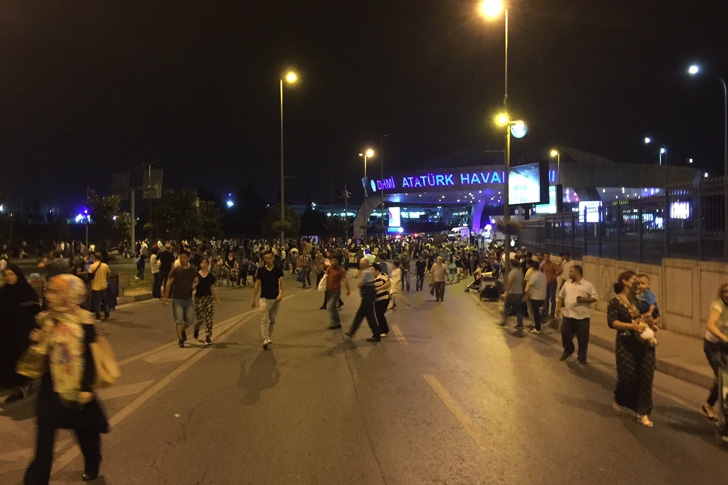 New Turkish prime minister Binali Yildirim accused terrorist outfit Daesh of responsibility for the attack on Europe’s third-largest airport on Tuesday evening, although no group has yet claimed responsibility.

Disturbing footage is still emerging from the scene, where it is thought that a trio of men arrived by taxi to the international arrivals terminal, promptly exchanging gunfire with security guards before breaking their way into the airport.

One man clad in black was shown chasing passengers through the terminal before being cut down by armed policemen, his rifle sliding across the floor. He then detonated his explosive vest.

President Recep Erdogan, who has seen his country withstand increasingly violent atrocities, condemned the attack and called on western governments to support the global ‘war against terror’.

“Despite paying a heavy price, Turkey has the power, determination and capacity to continue the fight against terrorism until the end. Today’s attack targeted 79 million Turkish citizens along with 7.5 billion human beings around the world. The bombs that exploded in Istanbul today could have gone off at any airport in any city around the world.”

“Make no mistake: For terrorist organizations, there is no difference between Istanbul and London, Ankara and Berlin, Izmir and Chicago, or Antalya and Rome.”

“Unless all governments and the entirety of mankind join forces in the fight against terrorism, much worse things than what we fear to imagine today will come true.”

Leaders across the world have issued statements of condemnation, sympathy and solidarity, with the White House describing the attack as “heinous” while Nato reaffirmed its support of its member state.

Ataturk, named after the country’s heavily idolised founder, has since reopened with international flights expected to resume this afternoon.

Turkey has seen a steady increase in terrorist attacks this year as multiple wars continue to rage across the border in Syria. Suicide bombings and violent attacks have steadily made their way towards the country’s most cosmopolitan city since October when twin bombings in the capital Ankara killed more than 100 people.

While terrorist cells linked to Daesh have claimed responsibility for some of the spate of attacks, Turkey has also plunged into renewed conflict with Kurdish militants operating across the country’s porous border with the Arab world, although the separatist groups typically choose police and military targets.