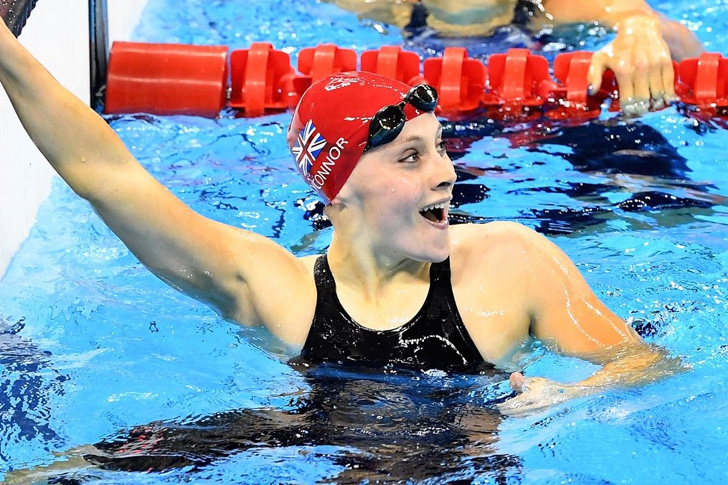 RECORD-BREAKER: Siobhan-Marie O'Connor realizes that she has won the silver.

TEAM GB collected a pair of silver medals in the pool, where the incredible Michael Phelps picked up his 20th and 21st Olympic medals following his victories in the men’s 200m butterfly and 4x200m freestyle finals.

The seemingly invincible American reclaimed his butterfly title from South African Chad de Clos, who beat Phelps in London but could only finish fourth here as the American cemented his position as the most decorated Olympian of all time.

Phelps also swam the final leg in a dominant US relay performance, with Britain’s quartet of Stephen Milne, Duncan Scott, Dan Wallace and James Guy coming in a highly creditable second, with Guy pulling in Japan’s Takeshi Matsuda on the final leg to seal a dramatic silver medal for the swimming team.

In the women’s events, 20-year-old Siobhan-Marie O’Connor smashed the British record to take a wonderful second place behind Hungary’s Katinka Hosszu in the 200m individual medley, making her the first British woman to medal in the discipline.

The Somerset-born flyer suffers from a chronic bowel disease, making her silver medal performance all the more remarkable, and she seemed overwhelmed as she told the BBC: “It doesn’t seem real but seeing my family, I was getting choked up.

“It means everything. It has been tough but it is so, so worth it.”

Elsewhere, the heavily-fancied equestrian team failed to make the eventing podium for the first time since Atlanta 1996, finishing a distant fifth as France bagged the gold, while the women’s gymnastics team was unable to capitalise on a promising start as they also finished fifth in an event dominated by the US and the incredible Simone Biles.

Andy Murray was comfortable as he moved into the last 16 of the men’s tennis tournament, with Johanna Konta fighting through to the last eight of the women’s competition, while London 2012 gold medallist Katherine Grainger and partner Vicky Thornley went through to Thursday’s double sculls final in the rowing.

Organisation at this Olympics has left something to be desired thus far, and this was compounded in an amusing turn of events at the Maria Lenk Aquatics Centre, as the water in the diving pool turned a lurid green colour to leave nonplussed officials scrabbling for an explanation.

British diver Tom Daley, who had won a bronze medal alongside partner Dan Goodfellow just hours earlier, tweeted a photo of the pea green pool with the comment “Erm, what happened?” while Britain’s Tonia Couch, who finished fifth beside Lois Toulson in the women’s 10m synchronised event said: “I’ve never dived in anything like it.”